The SPOTLIGHT is on, "Bonded by Need," by Nina Pierce 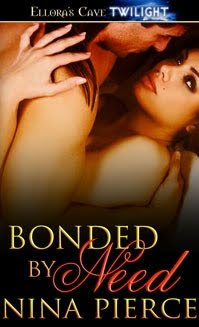 Veterinarian Jayda Kynslan recently moved to Montana. The mountains hold many secrets but none as mysterious as hers. She’s just discovered she’s a polymorphic shifter—wolf, cougar, human. Jayda’s not sure who she is—or what her heart and body need.

Recently promised to Cole Takoda, the head of the wolf council, Jayda wants to believe their bond will fulfill her every need. But there’s no denying her cougar growls for a mating of its own. Leader of the cougar council, Zane Brodan has no desire to get involved in a romantic relationship. Tangling with a shifter already promised to another is a bad idea—except when it’s a luscious polymorphic shifter doing the tempting.

Cole believes Jayda is his lifemate. Zane can’t resist her seductions. Someone wants to ruin all their plans. As the temperature and the body count rise so does Jayda’s need to possess both men—wolf and cougar—and her needs refuse to be denied.

Visit Nina on the web- www.ninapierce.com

Posted by Chicks of Characterization at 8:34 AM

I enjoy your books. They always catch my interest right off.

Patsy - Thanks so much for that. I'm currently working on the second in the Bonded series and hope to have it out in early 2010. Thanks for stopping by.