Get a sneek peak at Sea Witch by Helen Hollick! *CONTEST* 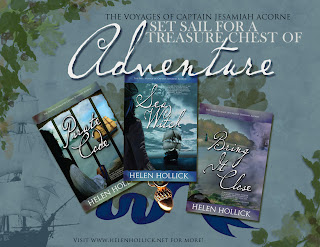 The Caribbean, a Pirate… and a White Witch. Sea Witch will probably be the best pirate story you have read since "Frenchman’s Creek". Pirates will be the number one genre interest with the hugely successful movie "Pirates of the Caribbean – The Curse of the Black Pearl". Johnny Depp’s exciting creation of Captain Jack Sparrow puts the subject of pirates firmly back into everyone’s imagination.
But if Jack Sparrow is the Captain of that particular ship, then my creation of Jesamiah Acorne, with his humour, cheek, sheer heroism – and his trademark fluttering blue ribbons – is most assuredly the First Mate.

The Time: The Golden Age of Piracy - 1716.
The Place: The Pirate Round - from the South African Coast to the sun drenched Islands of the Caribbean.
Escaping the bullying of his elder half brother, from the age of fifteen Jesamiah Acorne has been a pirate with only two loves - his ship and his freedom. But his life is to change when he and his crewmates unsuccessfully attack a merchant ship off the coast of South Africa.
He is to meet Tiola Oldstagh an insignificant girl, or so he assumes - until she rescues him from a vicious attack, and almost certain death, by pirate hunters. And then he discovers what she really is; a healer, a midwife - and a white witch. Her name, an anagram of "all that is good."
Tiola and Jesamiah become lovers, but the wealthy Stefan van Overstratten, a Cape Town Dutchman, also wants Tiola as his wife and Jesamiah's jealous brother, Phillipe Mereno, is determined to seek revenge for resentments of the past, a stolen ship and the insult of being cuckolded in his own home.
When the call of the sea and an opportunity to commandeer a beautiful ship – the Sea Witch - is put in Jesamiah's path he must make a choice between his life as a pirate or his love for Tiola. He wants both, but Mereno and van Overstratten want him dead.
In trouble, imprisoned in the darkness and stench that is the lowest part of his brother's ship, can Tiola with her gift of Craft, and the aid of his loyal crew, save him?
Using all her skills Tiola must conjure up a wind to rescue her lover, but first she must brave the darkness of the ocean depths and confront the supernatural being, Tethys, the Spirit of the Sea, an elemental who will stop at nothing to claim Jesamiah Acorne’s soul and bones as a trophy.

In the depths, in the abyss of darkness at the very bottom of the oceans Tethys stirred.She was the soul of the sea, the spirit of the waves and was capable,as the mood took her, of benign complaisance or malicious rage. She was without form or solidity yet she saw, heard, and became aware of everything within her jurisdiction. And she ruled her water realm with unchallenged power and a terrible omnipotence.

The winner will be picked at random once the SPOTLIGHT wraps up on October 1st!

Question- What is Jesamiah’s lucky charm?

And don't forget to check back with us to find our MORE about Helen and her best selling books!!! You don't want to miss a single minute!
Posted by Chicks of Characterization at 10:31 PM

(sigh) what would you do with him?

LOL the captcha for that last post was mirumm!

The answer is Jesamiah’s lucky charm is a gold acorn earring.

Hi - I'm late coming in to comment, although I've really enjoyed following Helen this week and did mean to comment before.

I loved, loved Sea Witch!and it made me a fan of Jes's (of course) I'm probably too late with the contest, but I think the answer is a gold acorn earring!

All the best Helen and Jers, long may you sail the seas together and I'm looking forward to the next book;.