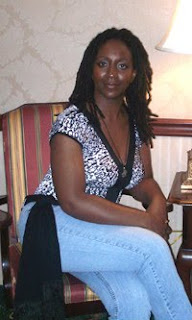 'Home is where my stuff is'. That's Reneé's motto... one of many.
An Air Force brat born and raised, Reneé has traveled all of her life. She was born in the Netherlands and raised in Japan, Texas, Florida, and finally Virginia.
Her travels didn't stop once high school ended. She attended college in North Carolina at Elon University, graduating with a B.A. in International Studies and a minor in Asian Studies, Japanese concentration. And after graduation, she returned to Texas to start her life with her husband and rejoin the ranks of Air Force living as a military spouse. From Texas, it was off to California for four years where she finished her first manuscript.
It wasn't until she, her husband, and their two cats moved to Maryland—where they currently reside—that she submitted said manuscript to Samhain Publishing, Ltd. and received a contract.
Given her upbringing and the military tendency of traveling, Reneé knows a lot about adapting to new locales and being 'the new kid'. It's no wonder the majority of her stories tend to be 'fish out of water' stories.
Unlike many authors who said they had a love of reading and writing since a very young age, Reneé used to hate reading and writing wasn't even a thought. If it wasn't on TV then it didn't interest her.
All that changed when her elementary school held a reading contest. A gold medal was waiting for all the students who read a certain number of books and Renee was determined to be one of them. She received her gold medal and a love of reading. From YA Romance to Mainstream Romance, Reneé discovered an addiction to the happily-ever-after endings the romantic genres offered.
She didn't start writing until high school. Back then, her stories were a way to pass the time in class so the teachers thought she was taking notes. It wasn't until another contest, a literary contest, surfaced that she considered writing a story with a definite beginning, middle, and end.
While she didn't finish the story in time for the competition and thus didn't get a chance to submit it for consideration, her English teacher at the time—her very first beta reader—gave her the encouragement needed to keep at it.
It took a few years and many, many rough drafts but Adrienne was eventually born. And, as cliché as it sounds, that was the beginning of the end.
Reneé loves reading (romances and manga) when she has the time but finds she loves writing even more. Her imagination entertains her far more than anything she could find on television, though it is a lovely distraction at times. And, the writing community has introduced her to good friends who are just as crazy and out-there as she is.

Site – http://dreneebagby.com/ and http://zenobiarenquist.com/
Blog - http://dreneebagby.blogspot.com/
Facebook - http://www.facebook.com/pages/D-Renee-Bagby-awa-Zenobia-Renquist/119689081398902
Twitter - http://twitter.com/dreneebagby
Newsletter - http://ymlp.com/signup.php?id=geusujygmgj
Purchase ERIS-http://dreneebagby.com/Books_Eris.html
*CONTEST*
Renee will be giving away an E-copy of HARLEY ON THE ROCKS to one lucky commenter! Winner will be picked at random once the SPOTLIGHT is over. So please leave your E-mail address so we may contact you should you win!!
Posted by Chicks of Characterization at 10:46 PM

Hi, Renee! Wish I'd lived as many places as you have. :) I bet your books are as colorful as your memories.

@Skhye - It has its pros and cons. I've seen a lot of places, but I was perpetually the new kid. Always packing and unpacking. Making friends and losing friends. Stuff like that. It's probably why most of my stories have the "fish out water" theme to them. :P

Hey, thanks for such a delightful blog! Renee, you are the first writer I met who did not like reading or writing since an early age. I think your elementary school did a wonderful thing for its students and YOU. You tapped into a hidden part of yourself and you are sharing it with the world! Keep on doing what you love no matter what.

@iamdiva - Thanks so much. My elementary school definitely knew how to motivate kids. I still have that medal tucked away somewhere. I need to find it and hang it up.

Wonderful interview! I've heard so much about you (all awesome), Renee, it's good to get to know you better. :-)

THanks for sharing. It would be sooo neat to see all those different places but I suppose not if it was constant moving...

I enjoy reading your stories. Especially ERIS because of sex scenes,BTW, they were HOT! My favorite book is SERENITY. That was sweet story. ADRIENNE have my blood pumping because of action scenes. You are amazing writer when I see your name I check out your books. Please don't this wrong way, you are very beautiful woman. You go girl! I love your newletters each month I look forward to reading PET'S PLEASURE. *hint* almost end of the month*hint*

Second post I hope I am at right spot.

@Maeve - I'm glad you've heard nothing but good news. I sometimes say too much and annoy people, but I usually have my heart in the right place.

@Brandy - I think you get a better feel for places when you have to live there a while instead of visiting, but moving will always be annoying.

Thanks all for stopping by.