Our SPOTLIGHT on Carolyn Poling Schriber wraps up with an introduction to A SCRATCH WITH THE REBELS ...*Contest* 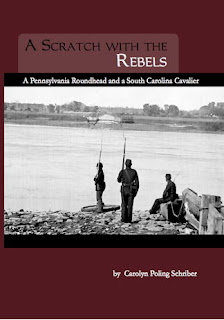 On a muddy South Carolina battlefield, a sergeant sat propped up against a hedge and tried to focus on the spot where he thought his leg should be. There was nothing – only the tattered remains of his trousers and a pool of blood that grew ever larger. The whistle of artillery shells had stopped, and the sudden quiet was as jarring as the previous battle noises had been. Shock had deadened the pain, so that all he felt was exhaustion as he closed his eyes. Sgt. James McCaskey had fought and lost his only battle.

"From behind a hedge on that battlefield, a young private picked his way through the bodies, following orders to gather up the abandoned weapons and tend to the wounded. Pvt. Augustine T. Smythe was stunned by the mayhem that met his eyes, particularly the sight of a soldier who lay with his leg shot entirely away. He whispered a silent prayer, as was fitting for the son of a Presbyterian minister, that he would never again have to witness such horrors.

"The Battle of Secessionville, fought out in the early hours of June 16, 1862, on James Island, South Carolina, brought these two young men together for a single moment. But the events of the Civil War had been drawing them together for almost a year. James and Gus were approximately the same age. Both were first-generation Americans, the sons of Scotch-Irish immigrants to the United States. Both stood firm in their Presbyterian faith, and both believed passionately in the cause of their countries. Both wanted to enlist from the day the first shot was fired at Fort Sumter; both had to spend months persuading their parents to allow them to join the army. They set out for their first battle on the same day – November 7, 1861-- and both missed the action by arriving too late. Both chafed at enforced inaction and longed to get into a real battle. Each of their Scotch-Irish mothers might have warned her son to be careful for what he wished.

They were just two soldiers, alike in many ways but different in the one trait that mattered on that battlefield. One was North; the other, South. Sgt. James McCaskey belonged to the 100th Pennsylvania Regiment, known to their comrades as “The Roundheads.” They came from the farms of western Pennsylvania, determined to defend for all men the Calvinist principles they most valued – self-reliance, industriousness, and liberty. Gus Smythe served in the Washington Light Infantry, part of the 24th South Carolina Volunteers. He was a college student from a well-to-do Charleston family and an ardent supporter of the Confederate right to secede from a political union that did not serve the needs of its people. This is the story of how they came to their opposing positions, and how the Battle of Secessionville altered not only their own lives, but the lives of those who shared their experiences.

Carolyn Schriber is currently preparing two e-books to be published as Kindle "Shorts". Nellie's Rx: Medical Treatments from 1862 and Nellie's Kitchen: Recipes from the Civil War are both companion pieces for her Civil War novel, Beyond All Price. Here is a short excerpt from Nellie's Kitchen.

A Civil War nurse had more to learn about cooking than about medicine. Nellie Chase soon found that her primary task was not to offer medical advice or dole out medicine. Her job was to keep the men well-fed and happy. Wounded men recovered more quickly if they ate well. Homesick soldiers perked up when they had a taste of home. And healthy, well-nourished men were much less likely to succumb to disease.

Nellie began her cooking lessons with the 100th Pennsylvania “Roundheads” Regiment. These young backwoodsmen taught her about Scotch-Irish and Pennsylvania Dutch cooking. Their move to Washington, DC, reminded Nellie of her own New England roots and encouraged her to teach the Roundheads the joys of fresh seafood. Then they sailed off to South Carolina, where abandoned slaves introduced them all to the African-inspired cuisine of the Low Country.

Later in her career, Nellie spent time in military hospitals, both as a patient and as a nurse. There she learned more about cooking for invalids. Then she traveled to Tennessee, where she added country cooking and other southern recipes to her growing collection.

By the time Nellie and her new husband, George Earnest, took over the operation of the Railroad Hotel in Paris, Tennessee, Nellie was not only an accomplished cook. She also had a menu that spanned the country from Maine to South Carolina, from the shores of the Atlantic to the Mississippi River.

Nellie’s inspiration to learn more about cooking for an army on the move came during a train ride. At one relay station, a group of volunteer women had set up an outdoor kitchen to provide hot, home-cooked meals to the soldiers passing through.


Looking around, she noted how the soldiers, almost to a man, had perked up. They were smiling, laughing, relaxing. Mentally Nellie made a note. I won’t be able to see the men fed like this often, but I must try to come up with some sort of treat for them now and then, she thought. I’ve heard an army marches on its stomach, but I never realized how true that is.

It took several hours for the baggage handlers to unload the train and reload the Roundhead baggage onto wagons. Nellie filled the time by chatting with the women who had provided their meal. One gray-haired lady cheerfully introduced herself as the Widow Barlow. “I don’t have anybody to cook for at home anymore,” she said, “so I enjoy getting the chance here to put on some really big feeds. Who cooks for all these men when they’re in their camps?”

“Well, mostly they do their own cooking, which isn’t good, I’m afraid. And at the moment I’m not much help. I can stir up some broth for those who are sickly, but I don’t know what to suggest to the men sitting around a campfire with nothing but a great big pot.”

“I can help you there. Let me find a scrap of paper and I’ll give you a couple of recipes that’ll fill their bellies”

Soak hardtack in milk. (Skim off weevils and other objectionable matter. You may want to start this the night before, depending on age of hardtack.)

When they are softened, cut salt pork into cubes and brown over medium fire. Add onion and cook until soft.

Add potatoes and water and cook until potatoes are soft, or at least tender.

Stir in hardtack and milk, then add remaining ingredients. Stir and cook to almost boiling, and serve at once.

The Widow Barlow called this recipe “older than dirt.”

Cut the salt pork into small cubes.
Slice the cabbage and onions (approximately ½ & ½)
If you use canned tomatoes, open the can. If not, cook them well ahead of time.

You can't really overcook this dish. The flavors will blend nicely the longer it cooks.

Add seasonings. Be sure to taste after adding each time. It takes the seasoning a few minutes to make themselves known. Better to add too little than too much. People can add more at the table if they wish.

After approximately 2-3 hours, start tasting. . . . It's the cook's sworn duty to taste test!! If you feel really brave, offer a spoonful to someone else.


auld reekie cock-a-leekie
This is an old Scotch-Irish recipe much favored by soldiers for obvious reasons.

Mix the whiskey with the water, tarragon and sugar. Place the chicken, bacon and beef into a large bowl and pour the whiskey marinade over. Leave to marinate overnight.

Next day, transfer mixture to a large soup pot. Add the leeks (reserving one) and the onion, and season to taste. Bring slowly to a boil, cover, and then simmer for 2 hours, or until the bird is tender. Skim off excess fat from the liquid.

Remove the chicken from the pot, skin, remove bones and cut meat into pieces before returning to the pot (cut up the shin of beef, if necessary). Add the prunes and remaining sliced leek and simmer gently for 10-15 minutes.
Visit Carolyn's website- http://www.katzenhausbooks.com/
Purchase A SCRATCH WITH THE REBELS- http://search.barnesandnoble.com/A-Scratch-with-the-Rebels/Carolyn-Poling-Schriber/e/9780979377204
*Contest*
Carolyn will be giving away a copy of A SCRATCH WITH THE REBELS to one lucky commenter! A winner will be picked at random once the SPOTLIGHT is over! So don't forget to leave a comment!!!
Posted by Chicks of Characterization at 10:01 PM

Labels: A scratch with the Rebels, Beyond all Price, Carolyn Poling Schriber, Katzenhous books

I had hard tack one time, it was a extra thick cracker. Dry though, but not too horrible. But I wouldn't want to live on it, lol.

I want to THANK Carolyn Poling Schriber for hanging out with us all week!

It's been a wonderful journey finding out all about her, and her books!

Beyond all Price and A Scratch With the Rebels both sound like fascinating reads!! And have been added to my own TBR pile!

Loved the Recipes and medical information, and I am thinking leeks must be the order of the week, as my mom and a dear friend were both making Leek recipes this week!!! I didn't even really know what a leek was!!! Hangs head in shame. :O(

Carolyn I wish you the best of luck in all your future endeavours!!!

Thank you so much for taking the time out to be here with us!!!