Our SPOTLIGHT is on FERAL FLAW by Skhye Moncrief ... *CONTEST* 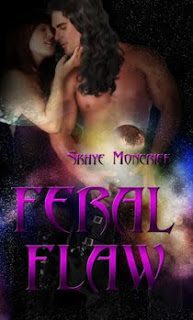 Sexual espionage never got any deadlier!

As the Blood Wars between psychic werewolves and vampires continue, Commander Goro’s deepest desire, his love, his promised mate, is taken from him in the worst possible manner. He learns she’s given birth to his arch enemy’s child, a deadly rumor for both his honor and her life. If he discovers she’s a sex spy, he’ll have to kill her. Now they must mate to disprove the rumor of sexual espionage. Although he’d postponed that moment of divine completion bonding their bodies through mystic sex and blood exchange to safeguard her from the treacherous game of manipulation—a game he and his intended play with everyone aboard his starship, he has no choice but to mate. Just one problem stands in his way…

Psychokinetic earthling Crazy Darla, manipulator extraordinaire unequaled by none other than Goro, realizes the only way to survive the rumored lie is to run for her life. But there was always something more in her motives than fantasies of delicious sex with the man she’s craved for years. Even though those motives felt carnal. Something else, pure and, perhaps, metaphysical haunted her. Perhaps in his goddess, Destiny? She had to believe in those feelings of love. But to trust is to show weakness in handing over one’s fate to another who just might ritually disembowel you.

Who is playing whom in the battle of masterminds? Sexual espionage never got any deadlier.

With the secret baby, bounty hunters, an entrancing crystal, and a space opera between werewolves and vampires forcing Goro and Darla into dark secluded corners, pushing them into carnal sexual interludes and dangerous blood exchanges fueled by the frenzied blood lust of were-mates, the future holds both promises and lies in the psychic war. And one wrong move means you’ve succumbed to the deadliest thing in the universe, your FERAL FLAW.

Contest:
I’m giving away a pdf of Book 1: FERAL FASCINATIONS to one lucky commenter. Read 1st chapter & blurb at http://www.newconceptspublishing.com/skhyemoncriefbooks.html.

How to enter to win: leave me a comment. Each day you comment increases your chances of winning. Make certain to leave your email addy so you can be contacted. And one lucky person will be chosen at the end of the week!

Posted by Chicks of Characterization at 6:44 AM

Hi, Andrea! Thanks for having me over again. ~Skhye

Thanks so much for stopping by again!!! I cannot wait to learn all about Sexual Espionage! *Wink*

This looks really interesting. Definitely want to read this.

Feral Flaw is waiting patiently on my TBR list. Can't wait to dig into it! :-)))

I read your 1st chapter of FERAL FASCINATIONS it sounds very good, can't wait to read it.
Lori
rnlmac@msn.com

I'd love to read this! So far I've only read Vow of Superstition.

I read the blurb today. Loved it!

Whoops! Forgot my email addy on that last one!

These blurbs and the excerpt have me really into this series now. It sounds like a great read Skhye. The covers are pretty good too. :)
Carol L
Lucky4750@aol.com

I checked out your blog today. The flying saucer was so cute! Plus the space pictures were amazing. I love pics of space.