"I've described myself as a Vonda Sinclair junky. It's true. These books just get better and better. This one is multi-layered with conflict that keeps the reader riveted to the very last page." Cate Parke


"Ms. Sinclair hits another homerun with My Wild Highlander. A follow up to My Fierce Highlander, she picks up younger brother Lachlan's story. Forced into a marriage neither wants, the heroine and hero try to make the best of their situation. She has been damaged, and he has lacked true direction. She gives him a purpose, and he teaches her how to love and embrace life again.

With a cast of bad guys (and a bad woman), there is never a dull moment. The pace keeps the reader's interest, and there are enough twists to keep you guessing. As usual, Ms. Sinclair flexes her ability to write hot, steamy love scenes. With plenty of sexual tension beforehand, I worried my Kindle might melt when these two finally got together. If you like Scottish Historicals with lots of action and a satisifying ending, I highly recommend picking up My Wild Highlander." Derek Dodson 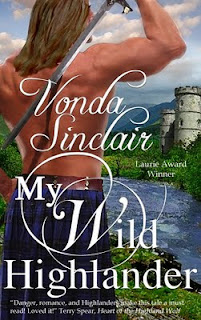 *Vonda will be giving away two prizes to two lucky winners!!! One Winner will recieve an E-copy of MY FIERCE HIGHLANDER and another will win a pair of handmade Silver Celtic Earrings!!! Winners will be chosen at random once the SPOTLIGHT is over!*


Posted by Chicks of Characterization at 10:08 PM

There is so something special about the dialect! I can feel I can hear it (I'm deaf) and I can imagine how it sounds and love it. I got that feel reading the excerpt too.

I too wanted to congrats you on your awards for your writing! I read that in a former post and wanted to mention that. He say's he's not a 'laird' and she says 'a highlander' so what that mean that he is tho a highlander. I think I understand with a laird, meaning owning his land and castle and his men. I love how she responded and can't wait to read how she falls for him! I so got that sense he's going to love teasing her and seducing her! Beautiful reviews!!

Caffey, wow thanks so much for what you said about being able to hear the dialect even though you're deaf. To me that is a huge compliment. I'm so glad to know I did it right, and in a way that allowed you to enjoy it and have the full experience. Thanks about the awards and reviews, too!

He is a highlander, meaning he's from the highlands of Scotland. But not a laird, you're right, because he doesn't have land. He has a great amount of fun teasing her but she doesn't make it easy for him, that's for sure! He learns a lot, but so does she. :)

Thanks for the giveaway. Please enter me in contest. Tore923@aol.com

I am really into Highlander books and this one looks great. Thanks for the contest
debby236 at gmail dot com

Tore and Debby, thanks so much for dropping in and entering the contest!

Oh, what a tease of an excerpt, Vonda!

Though it did bring back an incident that happened about 10 years ago when I went to see some male stripers for a bridal party. The dancer had done a highland act, which i complimented him on afterwards, whereupon he offered to take me to backstage to show me his sword.

Anyways, don't enter me for the earrings. I haven't had pierced ears in 20 years.

Julie, LOL!! That is hilarious about the stripper and his sword. Thanks for the laugh!