Our SPOTLIGHT is on LOVE TO THE RESCUE by Nancy Lennea ... 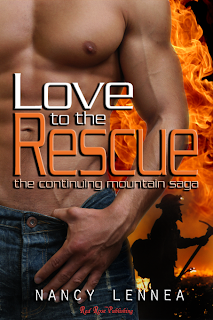 The clashing relationship between tomboy Josie Miller and fellow paramedic-firefighter, Pete Thayer, escalates after he realizes Joe is not just one-of-the-boys. Pete has a sketchy history and has earned a reputation for one-night stands in the small town of , nestled between the , the mountains, and the state college. Since he arrived a year ago, Josie suspects he is hiding something. Something too horrible to share, even with her. Working side by side, Joe loves her job, and Pete.

They respond to accident calls, medical emergencies, and fast-moving forest fires amid sparks of another kind. Joe’s clumsiness and baggy uniform work against her when she yearns to be the kind of woman Pete wants like the pretty blonde they must rescue after her car hits a moose.

Outside influences come to play when the sister of Pete’s alleged victim shows up and accuses him of something even worse…her sister’s recent death. Once on track to be a doctor, the sister’s betrayal and lies caused Pete to run far away and keep women at a distance unless they agreed to share his bed…and nothing more.
Pete plans to skip town while Josie worries she has given her heart to a monster. His boss and the local police back off and he professes his innocence to Joe. After kissing her senseless, she lets him into her bed until her bothers intervene. Both keep an eye on Pete. A suicide note, some well-landed fists, stolen moments of love, and a desire to listen to their hearts lead these two heroes toward a climax filled with tension, pain, bloodshed, and atonement.
Purchase LOVE TO THE RESCUE
Or AMAZON

Posted by Chicks of Characterization at 7:05 AM

Thanks for having me today. I am currently sitting in a hospital waiting room. I urge all to remember to thank the nurses, doctors, orderlies, and volunteers that care for our loved ones, as well as firefighters, paramedics, and cops found in my book.

It's my pleasure to have you and your HOT MAN on the blog today Nancy!!!

THANK YOU for taking the time out to hang with us this week! I can't wait to find out more about Love to the Rescue!!!

Oh no, you're at the hospital? I sure hope its nothing serious! Take care!!!

OOOOOOOOOOOOOHHHHHHHHHH NANCY MY THIS BOOK SOUNDS GOOD AND CONGRATS DEBY!!!

Love the cover! You were blessed by the cover gods for sure. Good luck with lots of sales - who wouldn't love a firefighter. :)

Hi Nancy and Andrea,
Love to the Rescue sounds like a light-hearted romantic suspense, in the Christie Craig style--and I love her books.

On a sad note, we had a 45-year old fireman in our parish who was killed in the line of duty this weekend. I think that writers use heroes involved in firefighting, law enforcement, and the military as a way of honoring these men who are willing to put their lives in danger to protect other people. So thank you for this story.
Julie

P.S. A hospital waiting room??
Hope everything is all right

Thanks Eliza, Julie, Hotcha & Paisley for stopping by and showing Nancy your support!

Nancy,
This sounds like a great read! It's definitely going in my TBR pile. Very nice cover!
B-