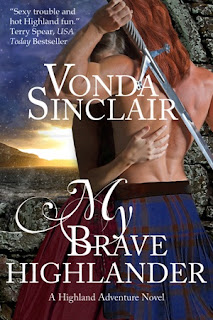 Battle-hardened warrior Dirk MacLerie isn't who everyone thinks he is. He's Dirk MacKay, heir apparent to the MacKay chiefdom and Dunnakeil Castle on the far north coast of Scotland. When he returns home after a long absence, will his clan know him and will the duplicitous enemy who tried to murder him twelve years ago kill him in truth this time?
Lady Isobel MacKenzie is a beautiful young widow betrothed to yet another Highland chief by her brother's order. But when her future brother-in-law accosts her and threatens to kill her, she is forced to flee into a Highland snowstorm. When she runs into a rugged and imposing man she thought dead, she wonders if he will turn her over to her enemy or take her to safety.
Dirk remembers the enchanting, dark-eyed Isobel from when he was a lad, but now she is bound to another man by legal contract—an important detail she would prefer to forget. She wishes to choose her own husband and has her sights set on Dirk. But he would never steal another man's bride… would he? The tantalizing lady fires up his passions, testing his willpower and honor at every turn, even as some of his own treacherous clansmen plot his downfall.
PURCHASE:
Amazon
Smashwords
B&N

"I REALLY enjoyed My Brave Highlander. Lots of action and sensuality--Dirk is so intense and yet when he's near Isobel the heat crackles and his defenses fall. The scenery is vivid and magical. I felt like I was in the midst of the Highlands, the snow falling and melting on my cheeks. Beyond the sizzling sensual tension (which Ms. Sinclair is an expert at weaving!) the adventurous plot had me on the edge of my seat. And Dirk's enemy--HATED with a passion. Ms. Sinclair has the unique ability to pull an emotional response from her reader on every single page.
"Filled with romance, I had a constant smile to my face, I got chills, the whole nine yards! This might be my favorite of all three books in the Highland Adventure series. Well done, Ms. Sinclair--I highly recommend this book! And I can't wait to read the next one!" Eliza Knight, History Undressed
"I loved MY BRAVE HIGHLANDER! An intriguing tale of Love, Loss, Betrayal and heart stopping romance! A story you definitely DON'T want to miss! You gotta love those Highlanders!" A.L. Snider, Chicks of Characterization

ABOUT THE AUTHOR:
Vonda Sinclair's favorite indulgent pastime is exploring Scotland, from Edinburgh to the untamed and windblown north coast. She also enjoys creating hot, Highland heroes and spirited lasses to drive them mad. She is a past Golden Heart finalist and Laurie award winner. She lives with her amazing and supportive husband in the mountains of North Carolina where she is no doubt creating another Scottish story. Please visit her website to learn more. www.vondasinclair.com

***I have personally read this book and it DOES NOT disapoint!!***
*Vonda will be giving away an E-copy of MY BRAVE HIGHLANDER to one lucky commenter. Please leave your E-mail address with your comment in order to be eligible.*
ENJOY

CONGRATULATIONS to SUZY you are the WINNER of Vonda's GIVEAWAY please contact us with your E-mail address so we can get you your prize! If we do not hear from you in 5 days we will have to pick a new winner!!
﻿
Posted by Chicks of Characterization at 12:01 AM

Thanks so much for featuring my book, Andrea!! :)

I love Vonda's highlanders! Please enter me and thanks for the giveaway Vonda, best to you!!

Thanks for the chance to win... love a good highland story and I'm looking forward to reading #3...
Have a good summer!

Thanks Laurie and Suzy!! :) If you read it, hope you enjoy. I had a lot of fun writing it!

Vonda never disappoints with her stories. I am so excited to see another one of her stories ready to read. Great cover!!!

Thanks tons, Paisley!! Hope you like this one too. :)

Thanks for the chance to win, Vonda. Your Highlanders are the best!

Thanks a bunch, Jena! I'm so glad you like them!

I can't wait to read this book!!

I love the excerpt. Will have to find time to read this. I would have clubbed him over the head too for breathing his foul whiskey on me :)
Congrats, Vonda.
Cora Blu

LOL Thanks, Cora! He got what he deserved.

I do love my highlanders.I would love to read this.

Love, loved, loved the excerpt, Vonda! You have a winner. :)

Petula, thanks! I'm glad you're wanting to read it.

Thanks tons, Gerri! I'm so glad you like the excerpt! I love strong heroines who can sock it to bullies.

I loved this book!! Wishing you many sales!

Tried earlier to comment but had no luck, so trying again ;)

Love your new cover and the book sounds amazing. Best of luck.

B.J. thanks! Sorry you had such a problem with it. I'm so glad you like the cover!