By Pat McDermott
Book #2 in the Band of Roses Trilogy
"Irish Kings still rule the Emerald Isle - and Princess Talty is in trouble again ..." 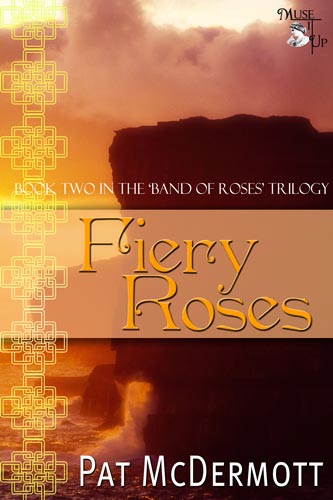 Irish Kings still rule the Emerald Isle, and part of the kingdom is burning . . .
In the thrilling sequel to A Band of Roses, the discovery of gas off the coast of Ireland ensnares Irish Crown Princess Talty Boru and her Royal Consort, Neil, in a web of blackmail and murder.  Intent on convincing County Mayo’s residents to allow a pipeline to cross their pristine boglands, an arsonist is setting homes and land ablaze.
One of his fires sends newlyweds Talty and Neil to an ancient world at the mercy of a waking volcano. Their fledgling marriage comes under attack as they struggle to find their way home, and while they try to outwit a tyrant with a shocking secret, King Brian locks horns with ruthless oilmen trying to bully their way over the bogs.  The resulting conflict proves fatal for the Boru clan, whose members once again close ranks to thwart the latest threat to the kingdom they are sworn to protect.
EXCERPT
From his window seat in one of Casa Verro’s largest guest suites, Neil opened the shutters and inhaled the briny sea breeze. Beneath him, a patchwork of planted fields and pastures stretched for mile after emerald mile. Yet the realization that the land sat on a waking volcano spoiled the idyllic scene. That, and knowing the verdant panorama wasn’t Ireland.
The air currents shifted. Tantalizing whiffs of pork and bread being roasted and baked for the Meddiss made Neil’s mouth water, yet they couldn’t subdue his growing dread that he’d never see Ireland again, never fly again, or zoom off in his Jaguar. His family, his friends, the home he’d built for Talty—Talty herself—would all be lost to him if the Peregrine Portal left him behind when it called the others home.
The fervent “Ooh!” behind him was a sound he knew well: Talty had found something to wear to dinner. His weighty brooding lifted. He turned his head just as Renen raised the top of a shimmering white gown over the pink-tipped breasts that perfectly fit the palms of his hands.
For over an hour, Talty had been trying on the late Lady Danella’s gowns. Renen had come to help. Her shocked gasp when she’d first seen the scars on Talty’s chest had nearly caused Neil to send the woman away. Talty had staunchly said nothing, and Renen, a servant unaccustomed to questioning her betters, had recovered well.
“This is lovely, Renen,” said Talty, and Neil silently agreed.
“It is the finest silk.” The fussing servant pinned the shoulder straps with matching broaches.
The dress fell over Talty’s bosom in graceful folds, the cloth so fine it seemed transparent. Gold threads woven through the material shimmered with her slightest move. The gathered waist flattered her slender form—too slender in Talty’s view, it seemed.
“It fits well enough,” she said with a downward glance, “but the top is too big.”
“Your mamms do look a little lost in there,” Neil called from the window.
The women’s heads twisted toward him. As he suspected, they’d forgotten him.
Talty’s brown eyes narrowed. She raised her chin and glared. “You never seem to have any trouble finding them!”
Renen grinned at the playful repartee and reached for Talty’s shoulder. “The baroness stretched the dress more, yes, but you, Lady, are well formed and lovely. We will show them. We only have to fix the pins.” She gathered the material tighter and reset the broaches.
When she finished, Talty’s eyes widened, silently asking Neil’s opinion.
“You look more grippable now, darlin’.” He made squeezing gestures and laughed at her openmouthed gasp. “Really, Tal, you look fine. No goddess could be more beautiful.”
“This one can,” said Renen. “We will add perfume and jewels, though even the baroness had no rings as fine as yours, Lady.”
Talty extended her hand and gazed at the rings Neil had put there. She smiled at him as she answered Renen. “I feel strange wearing Danella’s things, but I suppose I have no choice.”
“No,” said Neil. “The airline lost our luggage.”
CLICK LINK TO VIEW THE FIERY ROSES VIDEO TRAILER
http://youtu.be/CYmbvWxjDOk
PURCHASE FIERY ROSES
KINDLE 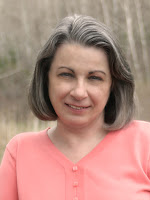 Boston native Pat McDermott grew up in a family full of music and myths that have found their way into her romantic action/adventures set in an Ireland that might have been. The first two books in her Band of Roses trilogy, A Band of Roses and Fiery Roses, are available now. The third, Salty Roses, is scheduled for a November 2012 release. Her Young Adult novel,  Glancing Through the Glimmer, and its forthcoming sequel, Autumn Glimmer (Jan 2013), are paranormal adventures featuring Ireland’s mischievous fairies. Pat is a member of the New Hampshire Writers’ Project, Seacoast Writers’ Association, Romance Writers of America, and Celtic Hearts Romance Writers. Her favorite non-writing activities include cooking, reading, music, hiking, music, and traveling, especially to Ireland. She lives and writes in New Hampshire.
FIND PAT ON THE WEB
Web Site: http://www.patmcdermott.net
Writing/Travel Blog (Put the Kettle On): http://pat-mcdermott.blogspot.com
Book Blog (Across the Plain of Shining Books)
http://acrosstheplainofshiningbooks.blogspot.com/
Facebook: http://www.facebook.com/home.php?#!/pat.mcdermott1
ENJOY
Posted by Chicks of Characterization at 12:01 AM

Lovely presentation, Andrea. Thanks so much for letting me and the Boru gang return. We love visiting The Write Life!

The love you have for Ireland is obvious. Congrats, Pat!

I am so happy you like it Pat! Thanks so much for allowing us to feature FIERY ROSES for you!!

Wishing you all the best!

Thank you, Andrea. Always a pleasure!

Can't wait to read this one, Pat! I loved "Band of Roses!"

You'll be sounding like your new puppy with all that panting, Miriam :-) I've had some good reviews for Fiery Roses saying it's just as good if not better than A Band of Roses. Can't complain about that. Whenever you get around to reading it, I suspect you'll enjoy it. For now, enjoy your upcoming trip!

Ditto, Cynthia, except for the puppy and trip parts. Thanks for popping in!

Best of luck with this and your other books!

I love your wonderful book, Pat. I can't wait for the next one. I'll be one of the first to grab a copy of Salty Roses.
~Cate

Thanks for the good wishes, B.J.!

Cate,I'm delighted to hear you enjoyed Fiery Roses. Thanks so much for the smile!

I love the cover and can't wait to read the book! Good luck with the series.

CONGRATS PAT ON WRITING A WINNER, DERFINITELY ADDING TO MY LIST!

I like how you have created an alternate Ireland that could have been. Sounds like a wonderful series. Will have to add them to my Kindle. :)

Sarah, Linda, and Kelley - thanks for the positive words and good wishes. I appreciate your stopping by!