Our SPOTLIGHT is on GLANCING THROUGH THE GLIMMER ... by Pat McDermott 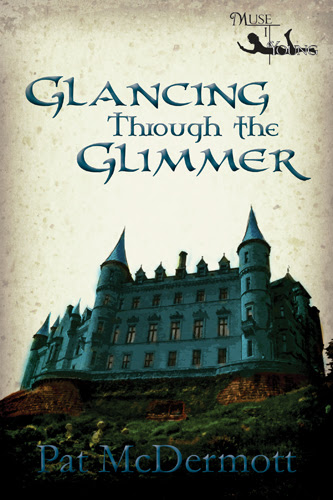 In the modern Kingdom of Ireland, few mortals believe in the fairy folk. Without that belief, the fairies are dying. Finvarra, the King of the Fairies, would rather dance than worry—but he must have a mortal dancing partner.


When Janet Gleason’s grandfather becomes the new U.S. Ambassador to Ireland, the sixteen-year-old orphan must leave Boston and her friends behind. Janet is lonely in Dublin and unused to her grandparents’ stuffy social life. An invitation to a royal ball terrifies her. She can’t even waltz and dreads embarrassment. Finvarra’s fairy witch overhears her fervent wish to learn to dance.


Seventeen-year-old Prince Liam Boru loathes the idea of escorting another spoiled American girl to a ball. In fact, he detests most of his royal duties. He dresses down to move through Dublin unnoticed and finds himself on his royal backside when Janet crashes into him. Intrigued, he asks to see her again, and she willingly agrees. Unaware of each other’s identities, they arrange to meet. When they do, the fairies steal Janet away.


Liam’s attempts to find her trigger a series of frustrating misadventures. Can he and Janet outwit a treacherous fairy king who’s been hoodwinking mortals for centuries?
*PURCHASE GLANCING THROUGH THE GLIMMER*
Amazon
Muse it up Publishing
*Visit Pat on the Web*
www.patmcdermott.net
Put the Kettle On
Facebook
Facebook page for Glancing through the Glimmer
*Pat will be GIVING away an E-copy of GLANCING THROUGH THE GLIMMER to one lucky commenter! Leave a comment to win! Entry must contain your E-mail address. No address NO entry!!! WINNER will be drawn at Random once the SPOTLIGHT is over on March 23, 2012! *
Good luck!!!!
Check back with us tomorrow when we will MEET the Author, Pat McDermott!
Posted by Chicks of Characterization at 12:01 AM

Best of luck with this and future works!

Thanks, B.J. And thank you, Chicks, for your hospitality this week. The post looks great!

sounds good, I can't wait to read it.

Sounds delightful! hope you have enormous sales and reach a wide audience...YA rocks!

Marilyn, thanks for stopping by. You too, Archie. I agree, YA rocks!

Sounds intriguing. I haven't read a good fairy story in a while.

Rosemary, if your TBR pile is anything like mine, we'll both need years to catch up with all the books we want to read! Helene and Cheryl, I'm fairly certain that anyone who loves a good fairy story will love Glimmer. Thank you all for stopping by!

Hi Linda. Thanks for popping in to say hello!

Thank YOU, Pat for allowing me to feature Glancing through the Glimmer this week!!!

I love YA, and will be adding this to my TBR pile!!!

Thanks to everyone who has stopped by and showed Pat your support!!!!!

We have a great week planned!!
~Andrea

I loved this darling prequel to your other books, Pat. It held me straight through to the end. Okay, okay--all I want to know is when the next book in your series will be released??? I can't wait to run out and grab it.
~Cate

Good luck with the stories, Pat!

I love hearing and reading about your Irish tales, Pat! Please keep them coming!

I doubt I will make a trip to Ireland so the only way I will experience an Irish adventure will be to visit through your stories. Best wishes.

Dana,thanks for the kind words. Same to you, Cate. No word yet on when the sequel, Autumn Glimmer, will be ready. I subbed it nearly two months ago but haven't heard yet. Hopefully I'll have good news soon!

Hey Dawn, thanks for the good wishes. Victoria, glad you like the stories. I plan to keep 'em coming for a while :-)

JQ, thank you so much. I hope you do get to visit Ireland some day. I know it would fuel that wonderful writer's imagination of yours. Meanwhile, I'll do my best to "show you around" :-)

I've been eyeing this one. Let's see if I can snag a freebie. Huh, Pat, huh? I'll swap!

My email is available on my blog profile.

Thanks for the smile, Marva. You do that so well, among other things. Your books are high on my TBR list. As for 'Glimmer', I hope you win this time. Heck, I hope everybody wins! The fairies like that.

Thanks for stopping by, Natalie!

Pat, I love fantasy and this sounds like a wonderful read. Good luck; I hope everyone will take the time to read your story.

I truly enjoyed Glancing Through the Glimmer. As a young adult of 45 years, this tale kept me engrossed right through with so many great characters and beautiful scenes. I look forward to Autumn Glimmer Pat!

Penny, wouldn't that be lovely?Thank you for those happy thoughts. I hope you'll be one of the readers!

Why thank you, Dave! I'm so glad you enjoyed the story. We'll get Autumn Glimmer out as fast as the fairies allow :-)

Absolutely fascinating - a book I must read.

Hi, Joan. Thanks for stopping by!

Vonda, I think you'd enjoy it. It's lots of fun for sure. Thank you so much for visiting!

A fairy tale set in Ireland that comes with a prince no less! Would love a copy pls.....*fingers crossed*

Linda, I feel the same way about fairy tales and princes. Thanks for stopping by, and good luck with the contest!

I would love to read this book. It sounds good. Please enter me in contest. Tore923@aol.com

Will do, Tore. Thanks for stopping by!

Hang in there, Linda!