The SPOTLIGHT is on, "DIVINE TOUCH," by Kristy Denice Bock 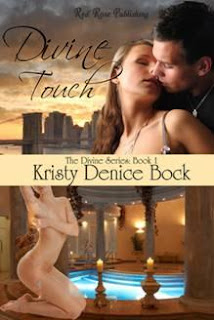 Finding a naked man where Werewolf bones once were should have let Kate know she was in for an unusual day! By the end of her unusual day she discovers that her mother is a Goddess, and that nothing in her life would ever be the same. Zane DeSeville spent five centuries trapped in a prison of his own body only to be awakened by the image of the woman who caused his entrapment.
After Kate discovers that she’s the daughter of a Goddess, another bombshell is dropped in her lap. She has to pass three
Trials of Humanity, or she’ll be imprisoned as Zane had been, and Zane would be her judge and jury!

Divine Touch is definately Divine. The characters practically leap out of the pages. I can't wait for Divine Intervention.

Awesome work, Kristy. Do you give lessons on writing? LOL