Today & tomorrow our SPOTLIGHT is on 'Divine Intervention', by Kristy Bock 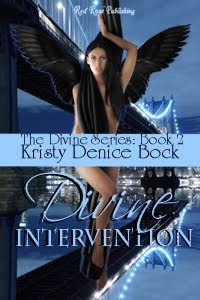 What’s worse, finding yourself in Death’s waiting room in your wedding dress… or finding out that someone wants to steal your soul?

Savannah Delseno takes the position as Death’s assistant, because, really, what other choice did she have? She was dead. It didn’t hurt that Gabriel, the one known as Death, intrigued her in a way that she’d never experienced before in her former life.

Gabriel had no intention of getting close to his alluring new assistant. He would not be manipulated by his former assistant, about to become his sister-in-law, or any of the six meddlesome Divine Ones that seemed intent on interfering in his life.

Can Savannah and Gabriel withstand a crazed soul hunter, an ancient curse, and everyone’s best intentions to find a love that can withstand death itself?

Visit Kristy on the web- http://www.kristybock.com/services.html

*Head over to BLOG TALK RADIO tonight at 9pm EST, to find out more about Kristy Denice Bock and DIVINE INTERVENTION* http://www.blogtalkradio.com/literarygoddess/2010/08/27/the-literary-goddess

Check back with us tomorrow for more DIVINE INTERVENTION!!!

Posted by Chicks of Characterization at 2:09 PM

OMGsh this sounds good!!!! I am putting it on my book list!!!

I don't know what rock I was living under to have missed the first book but I'm glad I found out about it now.

This series sounds great and I look forward in reading it.

Thank you both so much!!! I hope you enjoy them. The first book is called Divine Touch, also from red rose publishing! :) Happy Reading

Thanks! I hope you enjoy it!!