Our SPOTLIGHT is on Mariposa Cruz & HOWL! 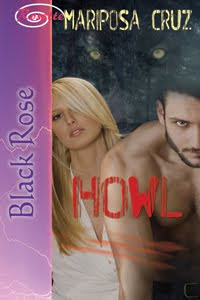 As if Kate Owens doesn't have enough problems as a struggling single mom and paralegal, a brutal animal attack outside her office plunges her into turmoil.
At work, she is attracted to her rescuer, Jack Walker, an attorney wary of commitment. Every morning after the attack she awakes drenched in blood beside the body of a mangled stray. Kate's days become a battle to maintain control while her nights are a disturbing blur of dreams.
Will Kate's nightly madness harm her young daughter?
Lone wolf attorney, Jack Walker understands the reason for his paralegal's exhaustion and haunted demeanor. Jack has pursued the beast since law school graduation and he knows the creature's relentless thirst for revenge.
Can Jack save Kate from her attacker and her own savage nature?
CLICK here to PURCHASE HOWL-
Visit Mariposa's blogsite.
Posted by Chicks of Characterization at 6:42 PM

I would like to WELCOME Mariposa Cruz to the WRITE LIFE! I am looking forward to learning more about her and HOWL! I sooooo, LOVE that title! And couldn't be more perfect timing right before Halloween! Welcome Mariposa!

I love the cover of HOWL, he is hot!!! Thanks for sharing with us today. You are a new author to me but I am putting your name and book on my book list!!!

Andrea,
Thanks for inviting me. Halloween is my favorite holiday. I love your blog!

Brandy B,
Rae Monet does amazing covers doesn't she? I hope you enjoy Howl!

Pat,
Thanks for the good wishes!

Love the title. Here's wishing you lots and lots of sales.

Oh, I adore Rae Monet. She did my website and my cover.