AND introducing FREEDOM IS EARNED by Kristal Mckerrington ...

Freedom Is Earned
(Back Cover)

What would you do if you saw two Street Hip Hop crews face off?

Would you recover from a shooting, then go on to lead your dance group to victory; not only to save your training ground, but to find out who tried to kill you?

In a love triangle of lies, who would you turn to?

A confrontation that could tell you who tried to kill you, and disband the very people who were behind the attack: would it be worth the risk of you losing a crew that you had built up yourself with your own bare hands?

Welcome to Ambers life in 'Freedom Is Earned' where its all about the Streets and what you have to do to survive?

Can you heart take the heat? 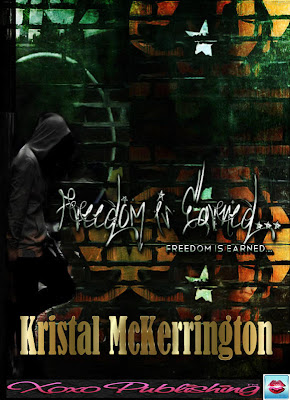 Now for a preview of Kristal Mckerringtons latest release- FREEDOM IS EARNED!

Out on the street, the wind started to pick up again and I shivered against it while I wrapped my wool cardigan around me tighter. The bitterness of the wind whipped at my face as I rounded the corner.

In the distance, I heard the sound of a motor bike revving. It was a sound that I liked and it reminded me of the country boys on their trail bikes bombing around the hills.

Moving around the corner, I started to walk towards the entrance of the local children's playground when I heard the bike draw closer at a fast-pace.I stopped now and took out my car keys while looking around for the bike. There was no sign of it even though it didn't sound far away now.

I walked on with a shiver. I now crossed the entrance to the playground and it was then that I saw a black shining Blackbird come flying around the corner, slowing ever so slightly as the rider straightened up the bike. I noticed the bike was completely black, but I could tell it was a Blackbird by its headlights. Upon nearing me, the biker seemed to shift his hands and, as he grew closer, I realised he was holding a gun.

The next thing I knew there were a series of loud bangs, then I felt my body being thrown to the ground. Pain swerved my body, pinning me to the ground harshly and with a force that knocked the air from my lungs.

I felt my mouth falling open where I let out a scream of pain that erupted through my throat and I felt alone and trapped in my searing pain-filled body, hearing the distant screams of my friends and, not long after they started, the sounds of distant sirens.

Struggling not to let my eyelids droop shut, I could see blurry images of my friends all around me, but was unable to communicate to them. The searing, burning pain roared and stabbed harder at me before I slipped into the darkness that had been clawing at me to enter.

In the darkness, I found peace and felt myself drift away into nothingness.

Freedom Is Earned is a book based on new things that aren't really done and ones struggle to survive and lead a group of people when their up against huge odds.