Another Sneak Peek into, HIGHLANDER WITH THE INK... 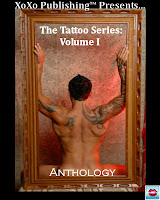 Marked me? Kill me? Those words stuck inside of Nancy's head and she felt herself wanting to scream as she pulled out what looked like a discarded baton from behind a coat stand. That was the one thing that Nancy's grandmother had taught her. That was how to protect herself just in case she was fighting men twice her size. She wanted her granddaughter to be safe.

Reaching it, she picked up the baton. When she turned, she took a deep breath. Nancy rose, sucking up the pain, hoping that it would help fuel her strength. Then she fully extended the baton with a simple flick of her wrist, and she raised her foot, kicking the one she knew as Odin into Thor, taking them by surprise as they landed on the ground on top of one another.

“They are already tired too, and no I haven't marked her yet. Well, at least she has the fire inside her.” Thor stumbled out as he rolled his uncle off of him, then had to roll over his left shoulder as the baton narrowly missed, hitting him right between the legs. Then he had to duck and dodge her as Nancy threw everything at him that she had.

Odin stepped to the side, where he watched Nancy closely, realising that she would indeed fit into their world once her power was restored to her. Nancy had been one of the few children born that he hadn't known about. She was rare. She was a demigod and that was something that really didn't happen all that often. Her mother was the one goddess who had disappeared; her mother was Freya.

“You are right about that, Thor, but if we are going to protect her from the others then you are going to have to mark her before we have a visit from my brother, my other nephew and your ex wife,” Odin said wearily as he moved so that he was in no way near the fighting, as Nancy who was growing stronger despite the increased burning of her tattoo. Her strength was going to be short-lived. Before she knew it, she was back down on the ground with the burning taking a tight hold of her back yet again, but this time with such force she was whimpering and crying.

“Please don't hurt me. Ah!” Those were Nancy's last words before Odin rotated his hand in a full circle and she went unconscious where she lay.

“You couldn't have done that earlier?” Thor said, panting ever so slightly as he bent over, placing his hands on his knees and taking a deep breath even though he didn't need to because that was the one thing about being a god—you didn't really need to breathe; but without air, they had learned that their skin went into funny shades and they started to resemble the monsters that were always on the prowl inside them.
“No, she was fighting my presence there within her mind. What a troubled life she has had, poor thing. Losing her human father, thinking her mother is dead, then her granny really did die and her grandfather had taken off. You know who that was, right?” Odin said, as he came close to Nancy and gently lifted her up into the tattoo chair that was nearest them.

“No, who?” Thor asked, as he leaned against the wall of the tattoo booth where he was trying to decide whether or not he was going to go and get changed into something more powerful.

“Skadis, you know Freya's real father?” Odin asked, as he looked through more of Nancy's memories and seeing all that she had done to protect herself. “She is a nurse. That is good. We need some human knowledge careers in our group.”

“That is true. We need to take care of our people better. I believe that she will do just that and I believe she has a great chance of being a good leader of our people. Besides, I wouldn't worry about Freya; we know she will turn up, Uncle, and she will be looking for you since you are her real husband and she is bound to you,” Thor said as he moved around to where he picked up the tattoo gun and inspected it carefully. Odin had left it fully loaded and ready for him to mark Nancy as his before the ceremony of love could be finished, which would give her powers that were locked away deep inside her soul, after which she would truly be his.

“Oh, I am not worried about Freya. I am worried about what will happen when mother sees daughter again and especially when she sees that she is bound to you.” Odin spoke and moved away from the booth to give them privacy for what Thor was about to do.
Purchase- Highlander with the Ink~ http://xoxopublishing.com/shop-online/index.php?main_page=product_info&cPath=12&products_id=84
Visit Kristal on the web- http://kristalmckerringtons.blogspot.com/
Posted by Chicks of Characterization at 10:35 PM

Hey Kristal,
I have been trying to E-mail you- for some reason your Yahoo address is not working. Just thought you might like to know so you can look into it!

Wow, I love that exeerpt. I cant imagine being a demigod and not knowing. Then being marked/branded against your will. I love how you used the Norse gods. You don't hear much of them. I would love to read this book :)

What an imaginative concept for a story! Enjoyed the excerpt, Kristal.

Yeah my email is down and was hacked so I haven't been able to get back in.

I feel so honoured that you liked the excerpt Brandy B. This is the first of the 'Highlander God Series' we have more of them coming out. Keep an eye out for them. They all get more darker, more hotter and more involved as the series goes on.

Thank you Pat, it wasn't easy to pull these area's together. I just managed it. I really can't believe how many awesome comments there has been!

I really do feel honoured to have been here and to have met all of you.