Our SPOTLIGHT is on LILY of the NILE by Stephanie Dray ...

With her parents dead, the daughter of Cleopatra and Mark Antony is left at the mercy of her Roman captors. Heir to one empire and prisoner of another, it falls to Princess Selene to save her brothers and reclaim what is rightfully hers… 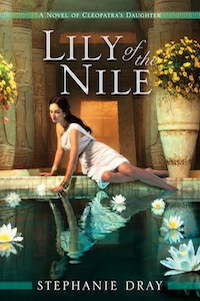 In the aftermath of Alexandria’s tragic fall, Princess Selene is taken from Egypt, the only home she’s ever known. Along with her two surviving brothers, she’s put on display as a war trophy in Rome. Selene’s captors mock her royalty and drag her through the streets in chains, but on the brink of death, the children are spared as a favor to the emperor’s sister, who takes them to live as hostages in the so-called lamentable embassy of royal orphans…
Now trapped in a Roman court of intrigue that reviles her heritage and suspects her faith, Selene can’t hide the hieroglyphics that carve themselves into her flesh. Nor can she stop the emperor from using her for his own political ends. But faced with a new and ruthless Caesar who is obsessed with having a Cleopatra of his very own, Selene is determined honor her mother’s lost legacy. The magic of Egypt and Isis remain within her. But can she succeed where her mother failed? And what will it cost her in a political game where the only rule is win or die?
Purchase Lily of the Nile:

Visit Stephanie on the WEB-  http://www.stephaniedray.com/
Posted by Chicks of Characterization at 10:22 PM

OMG I must have this book! The story premise is very intriguing. Thanks for sharing. I am going to tweet this for you.

Sounds like a great read..Thank you for posting about this book...

I enjoyed reading this blurb and am hooked. I'll be buying what looks to be an exciting historical read, Stephanie. Best wishes for success with this novel!
~Donna

I am really looking forward to reading this book. I have heard such great things about it and it looks really good.