Welcome Goro, could you please tell us a little bit about you?
RESPONSE: I lead a were-assassin movement against the psychic emperor’s reign through mind control. We fight for freedom of thought for all sentient beings in the universe, including those already zombified by the emperor.
Remembering the moment you first laid eyes on Darla, what thoughts come to mind? 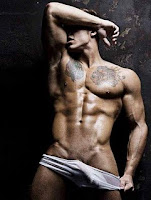 RESPONSE: She was so fascinating in how she had the capacity to love a mate—so different from those of us who’ve lost everything in the Blood Wars and had no reason left to love.

She has one trait you adored from the start. What is it? Hands down, she appreciates one of your traits…what do you think that is?
RESPONSE: Her intelligence. She would have to be smart enough to dance with me in this epic war of good verses evil. And she’s beautiful.

She has one trait you’d change if you could. What is it? You figure there’s probably a trait she might want to change about you… care to share?
RESPONSE: She needs to learn a little more self-control.

Ah, love is in the air. What is the single most romantic thing you’ve done for her?
RESPONSE: There isn’t much a warrior can do on a warship stocked with nothing more than rebels, living on half-rats. But I managed to buy her that pale blue dress on the Jennian priest’s moon! The way it looked against her pale skin and brown hair…

She has a feature that draws your eye every time. Care to share? She can’t stare at you enough… but where is she staring? Now’s the time to gloat about your thick head of hair. *Sky sniggers* Truth! Do you think it’s your eyes? Chest? Etc.
RESPONSE: Holiest Devros! Who can hold a steady gaze when the woman never stops trying? Touching? Plotting our carnal consummation! If only she’d try to ease off, I could stop and ponder soft curves… Ah! Breasts. The holiest of wells. I will say breasts. To tap the pleasure. The love. The life. To live again beyond fighting the war.
How do you think Darla would answer the following… Our favorite thing to do together is…?

RESPONSE: Our secret rendezvous usually end in her displeasure at not having sexually bound our souls together. *clears throat* I wouldn’t want her to know how those moments of touching, tasting, and breathing keep me focused. Surely she knows that already. Darla is no fool.

You and Darla don’t see eye to eye on what issue?
RESPONSE: Finalizing the blood bond. Becoming were-mates. It’s too risky. If she’s captured by the emperor, she will shapeshift when the forty-eight hours have passed since we last exchanged blood. And the emperor will know she is not my captive. Rather, my willing mate. I dare not live one moment imperiling my promised mate’s life.
She said one thing to you that you’ll never forget. What was it?
RESPONSE: Truly, it’s because of her intelligence. When she came up with the term “blood fucker” for earthlings who choose to willingly create were-mate bonds with psychics, I knew she was the only woman who could dance with me in this dangerous game of sexual espionage I needed to play in the Blood Wars.

Fall in love beyond this reality...

Posted by Chicks of Characterization at 10:51 PM

Thanks for hosting the character interviews, Andrea.