The Centurion and the Queen, by Minnette Meador 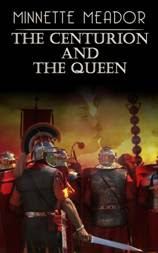 Marius has been stationed on 60 AD Britannia for sixteen years. Once a celebrated hero and a famous Praetorian Guard, he still clings to the old traditions as a fair but tough leader to his men, despite the shame that drove him from Rome.

Delia is sister to an uncaring Corieltauvi tribal king. Powerless, she watches as hundreds of Bretons succumb to their suicidal pride and throw themselves against the unstoppable Roman machine. The last thing Delia expects is to find her body craving the touch of her enemy.

The sudden intensity of their desire will change the history of a nation.

Separated by fate, they are thrown into the clash between 80,000 angry Bretons and a clever Roman general with only 10,000 soldiers. Marius and Delia find themselves on opposing sides, in love, and unable to stop the future. The revolution that sparked their desire...could now destroy them both.

The Centurion and the Queen is out in E-book form and will be in print form on April 15th, go to Resplendence Publishing for your copy today!

For more information about the author go to: www.minnettemeador.com
Posted by Chicks of Characterization at 6:36 PM

Labels: Resplendence Publishing, The Centurion and the Queen

Minnette, Your "Centurion" sounds like a great read. I look forward to it. Best of luck!

Beautiful cover! And it sounds like a fascinating story full of conflict and emotion! Congratulations on its release, Minnette!

Thanks Ladies, for showing your support, I know Minnette will appreciate it!

Thanks so much, you guys...this is my first romance and I've been so nervous about it, I'm like a squirrel on a freshly tarred roof. You have no idea how much your comments mean to me...:)