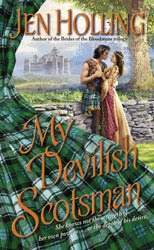 After reading MY WICKED HIGHLANDER, I couldn't wait to get my hands on the second book in the MacDonell Bride Series. Once again Jen Holling hits a home run with
MY DEVILISH SCOTSMAN.
Unlike her sisters Gillian MacDonell is not a witch, she's not confident and she's definitely not bold. So why would an Earl want to marry her, especially after being humiliated by her sister Isobel?

Nicholas Lyon, Earl of Kincreag is cold hearted, aloof and he may have killed his first wife. But to keep from being shipped off to France, where she's expected to marry an old man, Gillian is willing to sell her soul to the devil, even if the devil is Lord Kincreag.
At first Nicholas resists the offer of marriage but softens knowing that it is his dearest friend, Alan MacDonnell's dying wish. So using her powers of persuasion, and quite a bit of boldness taught to her by her sisters, Nicholas gives in.
Gillian is hopelessly attracted to her Earl, and doesn't want to settle for a "good match," so she decides to give Nicholas a love philter, but instead of making him amorous, it makes him suspicious.

Nicholas believes she is trying to poison him and the marriage gets off to a rocky start, it becomes even rockier once Gillian arrives at Castle Kincreag.

Strange things start happening and she starts to have visions. But worst of all, she believes someone may be trying to kill her?
Could it be? Would Nicholas kill another wife? Gillian doesn't want to believe it, she knows he is plagued with secrets, but she's glimpsed another side to him, a vulnerable side.

Hadn't she? Or could she be seeing only what she wishes most for? Did she imagine his kindness? Was his concern not real when she'd collapsed with her head pains? Was she imagining it all or was he acting? Trying to catch her off guard? But if it wasn't him, who was it and why? And what are the visions she keeps seeing? All fingers are pointing to Nicholas, even her sisters, who are witches, think him guilty. But is he? Or are there other sources of evil at work? AND when he finds her casting a spell with her sisters, will he protect her like he promised her father or will she face the same fate as her mother?
You'll have to read to find out!
Jen Holling has done it again. With a sweep of her pen she creates such heart-wrenching emotion, and a vivid picture of what Medieval Scotland must have been like. I fell in love with Gillian from the very start, she isn't the bold heroine that we normally see, but she grows into her own women as the book progresses. The attraction and love between the two characters is heartbreakingly warm and you can't help but cheer them on. The beginning hook is so intense that you won't be able to stop reading because of all the unanswered questions swirling through your mind. I had to resist the urge to peek! This story has so many twists and turns, and a few surprises that will keep you turning pages.
Congratulations again Ms. Holling on another wonderful book!
I give this book 5 out of 5 stars! *****
Now I can't wait to read, MY SHADOW WARRIOR, the final book in the MacDonell bride series.
Reviewed by- Highland Lassie
Posted by Chicks of Characterization at 12:20 PM

I love Jen Holling's books. I read them all quite awhile ago. Her Bloodstone Trilogy is really good if you haven't read those ones yet.

Hey Amy! Thanks for dropping by! I have read the last two books in the Bloodstone trilogy, and loved them! I actually have a review of Tamed by your desire! Hope all is well with you!!!