The SPOTLIGHT is on, "A Band of Roses," by Pat McDermott 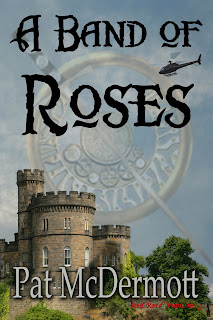 Irish kings still rule the Emerald Isle—and a princess is in trouble . . .

Ancient Irish traditions remain strong in a world where High King Brian Boru survived the Battle of Clontarf and established a dynasty that rules Ireland to this day. When greed for oil prompts England’s Regent to claim an Irish island in the North Atlantic, Irish Crown Princess Talty becomes a pawn in a murderous plot to seize the throne of England.

From Japan to California to an eleventh century Ireland preparing for the Battle of Clontarf, Talty must hide her true identity, though she can’t hide her ingrained training as a member of the Fianna: the warriors who guard the Kingdom of Ireland. She brings home a discovery worth more than any oil well, yet all she wants is to return to her family and Neil Boru, the adoptive cousin she secretly loves and cannot have—or so she thinks. Neil has a secret of his own, one that emerges as the Boru clan works with MI6 to thwart an invasion of Ireland and bring Talty home.

Review of A Band of Roses, by WRDF's Tabatha Franc:

This is a well written story I easily found myself lost in. I found myself diving into the lives of royals and warriors. This story is one of love, mystery, adventure and intrigue. This had many twists and turns that I never expected. The gripping love story accents the amazing adventures that the characters find themselves going on. By the end I found that I had laughed and cried with the characters. I found myself staying up till wee hours just so that I could find out what happened next. I can honestly say this is a story I will read again.
Don't miss out, get your copy of A Band of Roses, today!!!
Title: A Band of Roses
Author: Pat McDermott
Publisher: Red Rose Publishing
Genre: Mainstream /Alternate History Adventure
ISBN: 978-1-60435-292-4
Word Count: 133,982
Price: $5.99
Posted by Chicks of Characterization at 9:56 AM

Sounds like my cup of tea. Is this a contemporary or historical paranormal? Where can I find an excerpt???

lol, I was gonna tell you to check back that I might just have an excerpt! Glad you found it!

Pat,
I'm so glad to see a story about the Irish. Don't get me wrong. I love Scottish novels, but when you've got a blend of Scots-Irish, in your blood sometimes you don't know where the line is drawn. So I like seeing more stories about the Irish. Thanks.
Julie

Skhye, thanks for dropping by. I hope you enjoy the excerpt. And Julie, I love those Scottish stories too, but I'll leave the writing of them to those who do them best. Having grown up in Irish Boston, I know my place. :-)
Thank you, ladies, and thank you Andrea for Spotlighting "A Band of Roses!"

I agree with you Julie. We do need more Irish stories, but thats not to say I don't love my Scottish ones, but the Irish stories are just as wonderful! And it was my pleasure spotlighting this for you, Pat!