Our SPOTLIGHT is on Feral Fascinations, by Skhye Moncrief...*WARNING ADULT CONTENT* 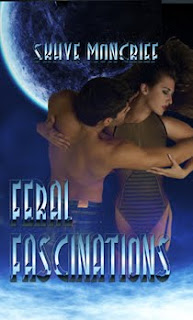 Their blood lust flares hotter than a solar storm.
Beyond rebels and rogues, the ultimate insurgents, psychic mercenaries, fight for your freedom of thought and hunt earth mates for one purpose--to defeat the universe's psychic emperor wanting to control all sentient beings through mind control. And you have no idea this war rages off planet. Failure is not an option for the free-thinking universe.
The free-thinking universe's prized psychic mercenary, Red Trekaar, is running out of time. A legend claims she will give birth to a child that will end the war. But seducing the only man whose blood could satiate her lust was a mistake…
A sexy Goth babe crosses Jake Straightarrow's path, and he wakes up in an alien-abduction nightmare with a chronic hard-on, powerless, labeled a blood fucker. She shanghaied him using some force's magnetic attraction. But a guy has self-respect. She should have earned his trust, then spread her legs. Especially after he learns sacred soul mates shape shift into uncontrollable werewolves trapped in a frenzied blood lust for their mate's blood. Self-control is what kept him alive so long. Now, the unshakable countdown to the moment he will shape shift ticks inside his head. His gut shouts escape stud service. Yet, humanity needs a hero. Colliding in a world of mind-reading games where one's best friend is the equivalent to one's worst enemy, each realizes trusting the other is as dangerous as buying into their FERAL FASCINATIONS.
Buy FERAL FASCINATIONS NOW!
Purchase Skhye's books on ~ Kindle ~ Nook ~ Amazon Paperbacks.
Visit Skhye's Website.
Join Skhye's newsletter & Yahoo Group group to be in the running to win a Time Guardian fan kit!
Posted by Chicks of Characterization at 10:18 PM

Thanks for hosting me, Andrea! It's always fun to hop over and see what you're currently reading. Nice cover on that one, btw. ;) ~Skhye

Hi Skhye. This sounds really good. I will have to put it on my book list!!! The cover is really hot too :=)

Hi Skhye! You know I always love hosting you!!! And yes, the cover is nice, eh? lol

Thanks, Brandy and Andrea!

Brandy, it is a great cover. The heroine always wears black leather though... ~Skhye

Sorry for the late comment. I look forward in reading your other posts and excerpts.