Our SPOTLIGHT is on VOW OF DECEPTION by Angela Johnson ...*CONTEST* 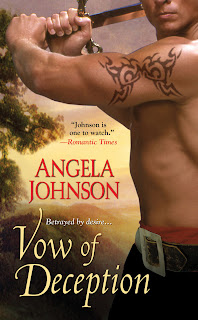 Your first allegiance is to your heart…
As a knight, Sir Rand Montague’s allegiance is to King Edward I. But when the king orders Rand to escort Rosalyn Harcourt to court in order to wed her off to Sir Golan—a crass knight Rand abhors—he’s torn between duty and desire. For Rand has never forgotten the woman he spent one unforgettable night of passion with…

After suffering abuse at the hands of her deceased husband, Rose wishes to never wed again. But when Rand rescues her after Sir Golan attempts to compromise her, she agrees to marry Rand in name only. However, sharing such close quarters with Rand brings back memories of their torrid rendezvous—and tempts Rose to give in to an all-consuming desire…

Angela loves to hear from readers.

Please contact her at her website, or if you wish to learn more about her and read book excerpts go to http://angelajohnsonauthor.com/

To sign up for a chance to win a $50 Susan G. Komen for the Cure Visa gift card, go to http://angelajohnsonauthor.com/contest.html

Or visit her at her Facebook fan page http://www.facebook.com/pages/Angela-Johnson-Author/107353814770?ref=search

Angela will be giving away TWO signed copies of VOW OF DECEPTION to TWO lucky commenters!!! So don't miss out on your chance to win- leave your comment today!!!! I mean, look at that cover, who wouldn't want to win that?????? :O)

Posted by Chicks of Characterization at 8:17 PM

I want to welcome Angela Johnson to the blog! Angela will be hanging out with us all week so we can get to know all about her and VOW OF DECEPTION!! I can't wait, I mean, take a look at that cover- YUMMY!!!!

Thanks so much for being with us Angela!

Andrea, thanks so much for your SPOTLIGHT on VOW OF DECEPTION. I look forward to getting to know your blog readers this Thanksgiving week. I'm a night owl, so most of my postings will be in the evening. ;-)

Welcome Angela!! This book is on my TBR list! I can't wait to read the rest!

Angela, love the cover art! Great job and the story sounds like a winner. Anything set in England wins my heart. I'd love to win a copy but it will also be on my TBR list for sure!

I just love that tattoo!

I have to copy everyone else and say YUMMY cover!!!!! Love the tattoo and the action pose. Your first book was awesome so I know this one will be too!

Cindy, that's awesome. I hope you love the books.

love the cover art! Great job and the story sounds like a winner. Anything set in England wins my heart.

Thank you Deanna. I don't know why but England's history fascinates me. I read your first chapters of No Turning Back. You got me, can't wait to read it.

Pat, thanks. So glad you love the tattoo, though its not historically accurate. But it looks so sexy on the model!

Your first book was awesome so I know this one will be too!

Thanks!Nicole. That means a lot to me, sspecially coming from you.

The word yummy, is YUMMY!! I'm THRILLED with the cover response. Positive comments NEVER get old.

Does "Oh My Goodness" count as a comment? *sigh*

Yowza! He's hot and the story sounds awesome too! Congratulations on your latest accomplishment!

I absolutely love the cover! That tatoo is pretty hot!!! I read an excerpt on your website and I have to say Rose sounds like a great character and I can't wait to see what Sir Rand will do next:)

Hi I love the blurb for Vow of Deception. It sounds like its right up my alley and the cover is amazing I love a man with a sword :) Thanks for sharing with us!!!

@ Maeve "Oh My Goodness" SO counts as a comment. Thanks! Dear.

@ Eliza Oh, Thank You, Thank You Thank You. Hope you like VOW OF DECEPTION.

@ Alexa Thanks for your congrats. And for your lovely comments!

@ "yadkny" I'm so glad Rose and Rand caught your interest. They have quite a few travails and triumphs that I hope will touch your heart. Hope you'll give VOW OF DECEPTION a try.

@ aka Brandy B So glad to share with you. I certainly have never been able to resist a man with a sword, especially one who can wield it with such "power and precision". LOL. Thanks so much.