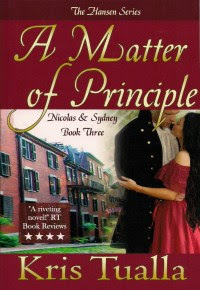 It's always something, isn't it? You go through life simply trying to mind your own business when injustice stands up, slaps you across the cheek with a glove, and challenges you to a duel.

And just when you thought it was safe to go back to Missouri.

Remember the Missouri Compromise? Vaguely? Ring a bell at all? The deal was, for every "free" state admitted to the Union (a.k.a United States of America), one "slave" state might be added. The Civil War in the 1860's didn't pop up out of nowhere, after all - the anti-slavery movement began a hundred years earlier!

Anyway, Nicolas Hansen was always vehemently anti-slavery, and none too pleased to find Missouri was admitted to the Union as the slave state in 1821. (Maine was the free state.) When both Sydney and his best friend, Rickard, approach him about running for the state legislature, Nicolas refuses. At first. Until a committee of local landowners strongly proposes the same thing.

Nicolas quickly discovers that "truth" is relative. And enemies from both his past and Sydney's rise up to take them down. His opponent is dirty. So is the editor of the St Louis Enquirer, the only newspaper around.

When Sydney is arrested for murder, Nicolas must decide whether to continue his candidacy or quit. But this time, it's a matter of principle.

A Matter of Principle is now available, joining the first book, A Woman of Choice and the second book, A Prince of Norway.

RT Book Reviews gave "A Matter of Principle" 4 STARS, saying: "This riveting novel shows that dirty politics have been around for a long time. The story is quite emotional, with plenty of action, and the characters have many serious problems, yet they also share much love and a fair amount of laughter. The time period is depicted quite realistically. It is helpful to have read the previous books featuring these characters."

I hope you will enjoy them. In fact, I hope you enjoy them so much that you say to yourself, "Gee. I wish there were more stories about the Hansens."

Your soon-to-be-wish is my command!

I fell so in love with Nicolas, that I decided that Hansen men (and one woman) would be the hero in all of my books. Different generations, different centuries, different countries; but all direct descendents of the same fictional Hansen Family of Arendal, Norway.

"Norway is the new Scotland!"

If you haven't heard: For every 10 people who comment today, I will give away one free e-copy of A Woman of Choice - the beginning of the trilogy. And, yes. Commenter #11 warrants 2 copies! Comment #21? I'll give away three.

Labels: A Matter of Principle, A woman of Choice, Goodnight Publishing, Kris Tualla, Nicolas and Sydney

Congrats on the great review. The things I love most about historicals is everything you learn or are reminded of from histoy. I am a bit of a history buff, I just never seem to get enough. I can't wait to read the series. Are you planning another book in this series???

Okay, now if I don't get picked I'll HAVE to buy the books...
There are to many good books in this world
(TT_TT)

This book also looks like a very good read. I think it would be best to read all of the books in order if they are the same characters.

What an undertaking, Kris! I'm so excited for you!

Brandy asks if there are more books in the series - YES! But the next books go back to 1354 and the aftermath of the Black Death, and are about the re-establishment of the Hansen family following the plague.