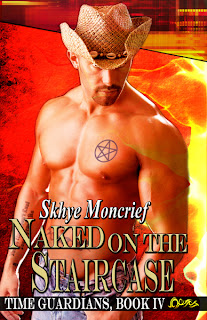 A demon stalks Druidess Aron MacKintosh, trying to use her to gain control of the timeline in present-day Scotland. Time plows toward Samhain when the doorways open between the Now and the Happy Otherworld. She finds herself in a strange alliance with an unusual time guardian, Cowboy. The duo struggles to defeat the demon. If Cowboy can’t earn her trust, the integrity of the timeline could be endangered. Only Cowboy’s charm and southern idea of chivalry has what it takes to leave an ancient evil bound NAKED ON THE STAIRCASE.
~REVIEWS~
"Druids, magic, time travel. They’re all present in Naked on the Staircase. The title of this book intrigued me, but by the time I’d finished reading I understood why the author chose this intriguing title. The entity is a mystery being whose identity is not solved until the last few pages, but its very existence holds the story together. Naked on the Staircase is well written with intrigue, mystery, magic and time travel, ingredients that work well in a fantasy novel. The interaction between Aron and Cowboy was excellent and the background of the story was skillfully woven into the book. I enjoyed reading Naked on the Staircase and would like to read more of Skhye Moncrief’s novels." ~Orchid; The Long and Short Reviews

"I enjoyed the chemistry between Aron and Cowboy and they had some really hot intimate moments that had me glued to the page. Cowboy rescues Aron from being tortured. They have some intense sexual energy and I loved watching them find their way together and realizing that they were soulmates and she would do anything to bind her heart to his." ~Jolene A. (posted on Amazon)

Loved the excerpt, Skhye. Thanks so much for sharing your series with us. I love time travel books and will definitely check this series out.