Our SPOTLIGHT is on Mac Liam by Renee Vincent ... *Contest* 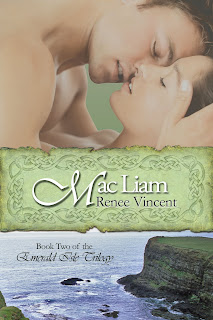 BOOK TWO of The Emerald Isle Trilogy~
A tortured soul…
Breandán Mac Liam, the strapping young hunter from Ireland’s lush forests, is in love with Mara, an ineligible beautiful princess. For seven long years, he has been vividly haunted by her memory, taunted by the throes of his heartache. And not even the thought of her marriage to a Northman can extinguish the fierce, burning desire running rampant through his heart and soul.
An innocent heart…
Mara, the spirited Connacht princess, has no idea she is the object of the Irishman’s longing. She is living out her days on Inis Mór, raising a troubled son and trying to endure the cruel loneliness that afflicts her.
A deadly secret…
Ordered by the king on his deathbed, Breandán must return to Mara and bring her through the perilous lands of Connacht to fulfill her father’s last dying wish. But as their worlds collide, Breandán not only finds himself wrapped in the arms of Mara’s embrace, but thrown into a struggle to defend his honor.
With Mara caught between the family she loves and the father she knows, can Breandán uncover the mystery of her past and still protect her from a secret that threatens them all?
Purchase Mac Liam now!
Amazon
Kindle
Nook
1Place For Romance
All Romance EBooks
Smashwords
Digi Books
Coffee Time Romance
Turquoise Morning Press
Visit Renee's Website & Blog
Friend Renee on Facebook
Tweet with Renee on Twitter
Visit Renee at Deep In The Heart Romance
*CONTEST*
Renee will be giving away an E-book copy of Mac Liam to one lucky commenter when the SPOTLIGHT is over, so leave your comments for your chance to win!
Posted by Chicks of Characterization at 11:16 PM

Thanks Andrea and Corrina! As always, it is such an honor to be spotlighted on your blog!

Great book, beautiful cover - congrats, Renee!! May you have many happy sales. :)

Im so glad the paperback is now available on Amazon...I gotta get that... it will look great on my bookshelf : )

Thanks Tina! You are so sweet!

And thanks so much to you too, Viking Princess! I am honored you want Mac Liam on your shelf in your home. *A big smile flashes on my face*

This is an amazing book, I have read it and you wouldn't be disappointed! Kristal x

Thanks so much Kristal! You are doll!

I just have to say I love this cover. That guy is hawt!

Yes, Mara and Breandán are a pretty sexy couple on this cover. I wish we knew more about the sexy models on both of your books.

Rosalie: I think the guy is hot too! Which is one reason why I picked that photo. The funny thing is, the guy was originally blond. But Breandán is dark-haired. So, the cover artist tweaked it a bit.

viking Princess: I would love to know who the guy is....but he's just a model on a stock photo site.
If anyone can dig info on him out....I'd love it!

I know this is going to be a wonderful book, Renee. I wish you great success with your new release.
Sarah

You're a new author for me but not for long. I look forward in reading your works.

Talk about a lovely cover!

Sarah: As always, your thoughtfulness is beyond compare. You sure know how to make a person feel good. Thanks for stopping by.

Tracey D: Well, that is music to my ears, darlin! I really enjoy meeting new readers and I'm glad I got the opportunity to meet you. Good luck to you.

Catherine: Thank you so much! I have to say I have gotten a great response on my Emerald Isle trilogy books and it certainly feels great to know they are pleasing to the eye.
Good luck to you too!

Renee this book sounds very good. I am putting it on my book list!!!

Thank you so much Brandy! I am ever so grateful.

I love reading books about Scotland and would love to visit there one time. Thanks for the giveaway!

Enjoyed the blurb for Mac Liam. Nice cover, too.
I like stories set in Ireland.
Wishing you many sales.

From the first sentence in Raeliksen we had Daegan and Mara together (Daegan watching Mara from the thicket) but in Mac Liam you made us wait awhile. In Mac Liam we don't get to see Mara until well into Chapter 4 and we waited even longer to see Mara and Breandán together...I think about the last page of Chapter 8. The suspense was killing me. I couldn't wait for them to see each other again and their reactions...my heart was racing. Was there a reason why you began Mac Liam with Breandán (yes, his name is on the cover of this book) instead of beginning with Mara or Breandán and Mara together?

I loved that in both books the first thoughts we get from both Dægan and Breandán were about Mara...both of these men kinda obsessing about her...lucky Mara.

I'm still looking for the name of the model on the cover of Raeliksen. All I've been able to find so far are photos of him on a stock photo site.
http://www.123rf.com/photo_5108824_stylish-and-confident-young-handsome-man-in-dark-sunglasses.html
I like this picture with the sunglasses...looks like Dægan time traveled to the year 2010.

Wow! Being of Irish and Scottish decent this book sounds awesome. Thanks for sharing.

rbooth43:Thanks so much! And nice to see you again.

Celtic Chick: I'm with you. Stories set in Ireland are fan-tabulous! Good luck to you!

Viking Princess:Was there a reason why you began Mac Liam with Breandán (yes, his name is on the cover of this book) instead of beginning with Mara or Breandán and Mara together?
To answer this question...I purposefully started out the respective heroes' books in their POV as they were both longing for our beautiful "lucky" heroine, Mara. To me, the hero's POV is so much more interesting. And with both books, I wanted to let the reader know exactly how the hero felt about her.
In Mac Liam, yes, I made you wait...but I did offer you some hot scenes ahead of time so as to "hold you off" so to speak. And yes, that two was on purpose. With Ræliksen, Mara jumps feet first in love with Dægan, where with Mac Liam, she would need to take her time. And I wanted to really establish how long Breandán was truly willing to wait for her.

I guess you could say it was to help establish the differences between the two heroes and make the love believable.