The Spotlight is on, "Love in a Box," by Eliza Knight 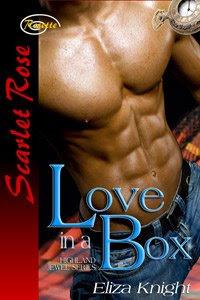 Colin MacDuff has grown up learning the ways of Highland warriors from his father Donell--but he's never believed his parent's faniciful stories of time travel, true love and a brooch known as the Highland Jewel. Until…he lands on his butt, literally, in the year 1648. Before him is the most beautiful, not to mention sexy as hell, woman he's ever seen. The only thing is, she refuses to be his, or to believe in the power of the brooch.

Sera wishes she'd been able to escape the Highlands like her sister did, and vows she won't marry for anything less than love, and refuses to be a pawn in a marriage deal. Until…Colin shows her what she's missing. He takes her body to the heights of heaven and back, all while proving to her that true love is possible.

Now everything and everyone, depends on the future of these two lovers. Will Colin stay in the past to save the future, and will Sera succumb to passion and love?
Review:
4.5 Ribbons at Romance Junkies!
"LOVE IN A BOX" is the third book in Eliza Knight’s HIGHLAND JEWELS series. After reading the first two stories I was anxious to find out just who the brooch would find love for next. The introduction of Colin is a delightful twist since we were privy to Donell and Lainie’s romance in the first story WARRIOR IN A BOX and it’s interesting to see how his going back in time affects the dynamics of the MacDuff clan. You also get to revisit Ian and Natalie from LADY IN A BOX. I loved Sera’s feisty nature and her determination not to marry just to join the clans. There’s no doubt that their union is meant to be and if the brooch’s bringing them together isn’t enough proof for you, the sexual tension between these two is certainly proof positive." ~ Chrissy, Romance Junkies
Excerpt-
He couldn’t believe it. The stories his parents told him about time travel had been true. Shit, shit, shit...
There was no other explanation for the woman’s outfit, the horse and the fact he disappeared from dinner in the blink an eye. He had traveled through time.
Was Colin now in his father’s time? What was that? 1647? 1648? Oh, Lord. Who was the chick?
He took a deep breath trying to calm his erratically beating heart. He held his hands in front of himself and mentally made them stop shaking.
Get a hold of yourself man! If his father could do it, so could he. Hell, the man taught him everything he knew. Colin bent down on one knee beside the woman. He brushed her long auburn waves from her face and then recoiled his hand in shock. She was the most breathtaking woman he’d ever seen. Her skin was the color of milk and honey. Well-defined cheekbones, a straight slender nose, and dainty chin framed her face. Her eyes were closed, leaving a thick brush of lashes lying against her creamy cheeks. Her full pouty lips were partially opened. He leaned down to listen. Her even breaths tickled his ear. At least she was breathing. And damned if he wasn’t turned on by the feel of it against his skin.
Gently he placed two fingers against her graceful neck. Her heartbeat was strong. Colin straightened out her limbs. Arms that were long and sculpted and legs that went on forever. He gritted his teeth against the desire simmering inside him. Whoever this chick was, she was hot.
To learn more about Eliza Knight please check out her website- http://www.elizaknight.com/
To purchase LOVE IN A BOX, click link - BUY NOW!
Posted by Chicks of Characterization at 2:22 PM

Thank you for giving me the spotlight chicks! You guys rock!

Oh, Highlanders and time travel! That's my cup o' tea. ;) And there's nothing like a 6-pack on the cover. LOL

Great story Eliza. I'll be adding it to my collection. What I really like about this one is that the gender is reversed. SHE's in the past. I don't find as many stories like that around.

Eliza, sounds like another great story! And love the cover....that's a real plus in sales.

Thanks for the sneak preview. Sounds like a fabulous story!

And yes, that cover is delicious isn't it??? lol