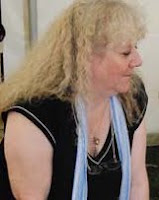 Hello. I am author Helen Hollick. I live in London, England, with my husband Ron, adult daughter Kathy, and a variety of pets. I have eight adult novels published, and I’m half way through the ninth.
I write historical fiction and pirate-based adventure fantasy. If you liked the Pirates of the Caribbean movies, and swashbuckling fun, the Sea Witch Voyages published by CallioPress are for you!
My “serious” historical fiction is published in the UK by CallioPress and Arrow Books (Random House) and in the US by Sourcebooks Inc.
These are:
The Kingmaking
Pendragon’s Banner
Shadow of the King
The “what might have really happened” story of King Arthur. There is no myth or magic in my books. No holy grail, knights in armour or turreted castles. No Lancelot or Merlin, just the down to earth gritty story of Arthur Pendragon, a warlord who has to fight heard to gain his kingdom, and even harder to keep it. At his side, Gwenhwyfar (the Welsh spelling of Guinevere) This is their story. Their life, love and laughter. Their tragedy and despair.

A Hollow Crown (UK title) The Forever Queen (US title)
Is the story of Emma, a Saxon Queen. Wife to two kings, mother of two more. You will probably be reading a lot more about Forever Queen next month, for it is published in the US by Sourcebooks in November and I am looking forward to an extensive Blog Tour.
This book is also to be translated and published in Turkey

Harold the King (UK title) I Am The Chosen King (US title)
1066 is probably the most famous date in English history – the Battle of Hastings. This is the story of the people and events that led to the battle which changed the tide of history forever.
I am also co-screenplay writer for the UK movie 1066 which is currently in development.

I am especially proud of my new UK CallioPress covers, recently re-designed for me by US freelance Graphics artist Cathy Helms of Avalon Graphics
http://www.avalongraphics.org/

Cathy’s ideas for my Pendragon’s Banner Trilogy were inspirational, simple, but evocative, giving an air of sumptuous luxury to a set of novels about the world’s most famous King.

The wonderful design for the Sea Witch Voyages have a superb ethereal and pirate feel to them. With detail that intrigues the prospective reader. Why is that pirate gripping prison bars while he forlornly watches a ship sail away? What is that blue ribbon doing in his hand? (Pirate code) For Bring It Close; who is the woman on the far bank of the river watching a ship come up out of the mist? On the back cover; why is that man holding his head, despairingly, in his hands?
And Sea Witch itself – the evocative image of a pirate and his beautiful ship – Sea Witch.
These covers will soon be published in the USA, but for now the original editions are available on Amazon.com

I initially wrote Sea Witch as a little light relief from the serious historical fiction: a bit of fun, and a chance to keep the main character alive at the end of the novel!
Johnny Depp’s wonderful portrayal of Captain Jack Sparrow awoke within many of us that “young at heart” craving for escapism fantasy adventure. That first movie, Pirates of the Caribbean – the Curse of the Black Pearl inspired me to research the reality of the early eighteenth century and the Golden Age of Piracy. Sea Witch and my character, a charismatic rogue Jesamiah Acorne, is the result. I describe the Sea Witch Voyages as a cross between Bernard Cornwell’s Sharp series, Hornblower and Indiana Jones.
Sea Witch - Voyage One
Pirate Code - Voyage Two
Bring It Close - Voyage Three
Ripples In The Sand – Voyage Four (published spring 2011 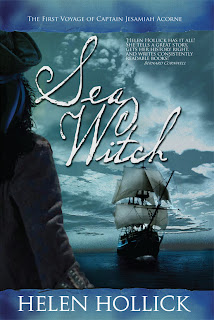 Escaping the bullying of his elder half brother, from the age of fifteen Jesamiah Acorne has been a pirate with only two loves - his ship and his freedom. But his life is to change when he and his crewmates unsuccessfully attack a merchant ship off the coast of South Africa.
He is to meet Tiola Oldstagh an insignificant girl, or so he assumes - until she rescues him from a vicious attack, and almost certain death, by pirate hunters. And then he discovers what she really is; a healer, a midwife - and a white witch. Her name, an anagram of "all that is good."
Tiola and Jesamiah become lovers, but the wealthy Stefan van Overstratten, a Cape Town Dutchman, also wants Tiola as his wife and Jesamiah's jealous brother, Phillipe Mereno, is determined to seek revenge for resentments of the past, a stolen ship and the insult of being cuckolded in his own home.
When the call of the sea and an opportunity to commandeer a beautiful ship - the Sea Witch - is put in Jesamiah's path he must make a choice between his life as a pirate or his love for Tiola. He wants both, but Mereno and van Overstratten want him dead.
In trouble, imprisoned in the darkness and stench that is the lowest part of his brother's ship, can Tiola with her gift of Craft, and the aid of his loyal crew, save him?
Using all her skills Tiola must con
jure up a wind to rescue her lover, but first she must brave the darkness of the ocean depths and confront the supernatural being, Tethys, the Spirit of the Sea, an elemental who will stop at nothing to claim Jesamiah Acorne's soul and bones as a trophy. 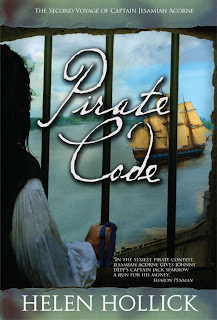 Jesamiah Acorne, Captain of the Sea Witch, has received a pardon for his crimes of piracy; but is still unable to free his love Tiola Oldstagh from her unhappy mariage to Stefan van Overstratten. As a white witch Tiola has the means of saving herself but refuses to use her craft, so Jesamiah must think of a solution. 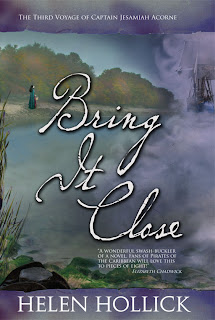 Jesamiah Acorne, Captain of the Sea Witch, has accepted a government-granted amnesty against his misdeeds of piracy, but old enemies do not forget the past. In particular Edward Teach - better known as Blackbeard - has a bone to pick with Acorne. Following an indiscretion with an old flame, Jesamiah finds his fiancée, the midwife and white witch Tiola Oldstagh, has gone to North Carolina to help with an imminent and difficult birth. The problem; that is where Blackbeard now resides.
He must not discover that Tiola is Jesamiah's woman, she will have to hide her identity and her gift of Craft from the black-hearted pirate who has sold his soul to the devil. With Sea Witch damaged and himself wounded by Blackbeard, Jesamiah has to take stock of his situation at his old home in Virginia - but trouble follows him like a ship's wake and he is arrested for acts of piracy on the High Seas.

Too much trouble has come too close! How is Jesamiah Acorne to clear his name, overturn a sentence of hanging, keep Tiola safe, put an end to Blackbeard and deal with being haunted by the ghost of his father? Bring It Close moves from the Bahamas to North Carolina and Colonial Williamsburg in Virginia at a swashbuckling pace. There is intrigue, misunderstandings, romance and adventure all wrapped up in a delightful blend of mystical fantasy.


AND …. A COMPETITION:
Win a signed copy of BRING IT CLOSE – Featuring Blackbeard!

How you ask? Well its real simple, leave the correct answer to the question below on any of the posts featuring Helen Hollick and you will be in the running for a chance to win a signed copy of Bring it Close! The winner will be picked at random once the SPOTLIGHT wraps up on October 1st!

Question-
What is Jesamiah’s lucky charm?

And don't forget to check back with us all week to find our MORE about Helen and her best selling books!!! You don't want to miss a single minute!

Posted by Chicks of Characterization at 8:18 PM

I just want to start the SPOTLIGHT by welcoming Helen! We are so thrilled to have you with us! I have to tell you the SEA WITCH books look incredible and I wish this wasn't my blog so I could enter your contest! lol, but alas, I can't. :O( Anyway, I have to say that your website is incredible and your new covers are AWESOME I love them!! I would definitely buy the books based on that alone!!! Thanks so much for being with us this week!!!

Thank you to both of you! You've certanly done Jesamiah & myself proud with our first day under the 'Spotlight'!

Good luck to everyone entering the competition!

You are a new author for me but not for long. I enjoyed reading the post and then checked out your site. Pirates and King Arthur...two of my favorite topics. I look forward in reading your works.

What is Jesamiah’s lucky charm? A gold charm dangling from his right earlobe: an acorn.

I look forward in reading your other posts this week.

hello booklover0226 (waves & raises glass in salute)
We have two things in common then -pirates and King Arthur! LOL

I think you will enjoy both (she says crossing her fingers and touching a gold acorn for luck!)

Hello, Helen--all of your books look wonderful. I wouldn't even know where to start. But I will!

I wish you all the luck of the Seven Seas with the series.

Hi. Your books look awesome. I love the covers. I believe the awnser to the question in a gold acorn charm/earring.

Thanks everyone. Enjoy the Spotlight week - lots more to come yet! :-)

A gold lucky acorn charm!!! Sounds like there's a kernel of a tale waitin' to be heard here!!! And a mighty oak springs forth from a small seed... ~Skhye

Helen, may I tell you I went to Amazon and gorged on Helen Hollick books yesterday? Honestly, you write everything I love--Arthur, Harold Godwine, you've got it nailed. Oh, yes, the acorn if the lucky charm.

Miriam - and everyone who buys a book (or more than one - gosh, thank you Miriam! :-)

don't forget to e-mail me your address (or a P.O. number) and I'll send you some signed bookplates to put in your books. No charge - all I ask is for you to donate £1 or $2 to a charity of your choice.
its author AT helenholick DOT net