Our SPOTLIGHT is on Beyond All Price by Carolyn Poling Schriber ...*Contest* 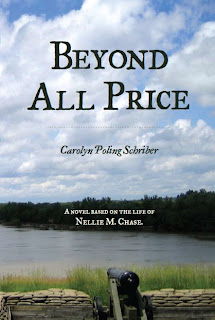 She was an under-age runaway, a battered wife, a lone woman trying to survive in world dominated by men.
Nellie M. Chase joined the Union Army with no credentials and little hope, but she became one of the unsung heroines of the Civil War. Determined to atone for the mistakes of her early life by dedicating her life to the service of others, she rose to a responsible position as head matron of a 600-bed hospital in occupied Nashville. Then she retired into obscurity, where she lingered until the world offered her one last chance to demonstrate her remarkable courage.
This is a historical novel in the best sense of that term. Nellie Chase was a real person—one determined to dedicate her life to the needs of her country. She left no letters and no formal records, except for the memories of those whose lives she touched. Her story, told here by a trained historian, includes facts wherever events can be documented. Fictional descriptions, conversations, and linking events strive to reflect the true nature of the time in which she lived.
As the United States begins a five-year commemoration of the Civil War, this novel offers a glimpse into the day-to-day experiences of the ordinary people whose lives did not make it into the historical record. Readers will sympathize with the struggles of a young woman forced to make her own way outside the normal bonds of society.
The novel contains enough military action to satisfy readers' curiosity about the army experience. Abandoned slaves and fanatical preachers raise controversial issues.
Disasters abound: hurricanes, rampant disease, military fiascos, makeshift operating rooms, collapsing buildings, competing cultures. Nellie's story is history from the inside—a welcome alternative to the standard historical analyses and political arguments that will necessarily dominate the Sesquicentennial events.

*Contest*
Carolyn will be giving away a copy of A SCRATCH WITH THE REBELS to one lucky commenter! A winner will be picked at random once the SPOTLIGHT is over! So don't forget to leave a comment!!!
Posted by Chicks of Characterization at 9:46 PM

Labels: Beyond all Price, Carolyn Schriber

This sounds really good! I like the cover too. Wishing you many sales!

This sounds fascinating! I love historicals.

This really sounds like a great read!! My first books I read were historicals and I still read them and still love them.

Thanks for all the kind words and comments. Hope you'll all stop by again later this week to read an excerpt and hear what else I'm working on.

I love historicals but fiction and non I can't wait to see if you have other books written :)

This sounds like a fascinating and informative read, as well as being an intriguing story. I'll be back to read the excerpt