A glimpse into "AWAKEN THE HIGHLAND WARRIOR" by Anita Clenney... 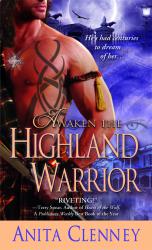 He's had centuries to dream of her...
Mis-adventurous historian Bree Kirkland discovers a one hundred fifty year old warrior buried in a crypt behind her house. But Faelan, the warrior, isn’t dead. When this chauvinistic Scottish Warrior awakes, he has no choice but accept the help of this modern-day woman who’s rescued him, but she’s more fearsome than the demon trying to kill him. If he’s not careful, she’ll uncover every secret his clan has bled and died to protect.

*EXCERPT*
Caught up in her thoughts, she didn’t hear the noise until too late. Faelan stood next to the bed wearing nothing but his talisman and tattoos, his face set like the Grim Reaper. Bree jumped to her feet, heart racing, the necklace clenched in her hand.

WOO HOO! GIVE ME A HIGHLAND WARRIOR ANYTIME!!!! LOL

Gotta love these beautiful Alpha Highlanders because Is sure do. :)
I absolutely loved Awaken The Highland Warrior and now want to read Embrace The Highlander. It's been a fun visit with Anita. Thanks again for this opportunity.GFC name is lucky47.
Carol L
Lucky4750 (at) aol (dot) com

I need a Highland Warrior of my own *swoon*

Hi hotcha, there are lots of yummy warriors in the series. And I adore them all. :)

Carol, thanks so much. I've totally enjoyed this visit. It's been a blast. And I hope you love Embrace as much as Awaken. Be sure to email me and let me know.

Jess, my husband tells some friends that it's him on the cover. :)

That kept me on the edge of my seat. I love the chemistry between the two of them. Loved that excerpt.
Sue B
katsrus(at)gmail(dot)com

Thanks, Sue. I do love Cody and Shay's chemistry. We get the best of both worlds; the bonds from the past and now they're kind of like strangers again.

I would like to THANK Anita Clenney for hanging out with us all week!!!

Its been a fun week, and I've LOVED getting to know Anita and her WARRIORS!!

I read "Awaken the Highland Warrior"and LOVED it, and cannot wait to read Embrace!!!

I also want to CONGRATULATE Anita for Selling her Paranormal Relic Hunter Series to Amazon Publishing!

Anita, we wish you all the best!! And want to thank you again for being here with us all week!!

Anita will be picking her winners over the weekend!

What an awesome excerpt, just pulls at you, gotta read the rest now! :)

Thanks, Andrea. It was so much fun. You have a great group here on this blog. I hope everyone will take a look at my website and sign up for my newsletter. I'll be sending it out here soon. Running a little late. :) Thanks again. We'll announce winners soon!

Thanks Eva. I tried to write a series that I would love. I'm so pleased that it's finding its way into so many reader's hearts.